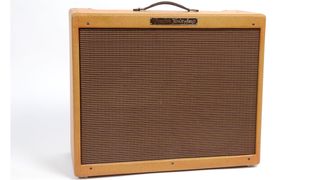 Fender's late-1950s 4x10 tweed Bassman combo is among the most celebrated guitar amps. Jim Marshall liked it so much that he pilfered Fender’s schematic to create the JTM45 and the early-to-mid- 1960s Plexi.

For many players though, Fender’s glorious 2x12 Twin Amp of the mid to late ’50s is the epitome of rock and roll amplifiers for that era and beyond.

A closer look reveals that it even has stunning parallels with the Marshall combo that helped to change the course of rock a decade later - which might explain how Eric Clapton, the legendary guitarist behind that sonic revolution, migrated so easily from a Marshall to a Fender combo over the course of his long career.

As Fender’s amplifier lineup evolved from wide-panel to narrow-panel tweed combos in the mid ’50s, the larger models in the range were populated by only two core circuits, differentiated primarily by their speaker complements and a few other tweaks.

Central elements of the design included a cathode-follower tone stack with independent bass and treble controls that were effectively driven by a 12AY7 preamp tube (a lower-gain relative of the 12AX7), a split-load (a.k.a. cathodyne) phase inverter and a fixed-bias output stage with a negative feedback loop to tighten up the response.

The 4x10 Bassman was similar in many ways, although it added a middle control to its tone stack, and it had a long-tailed-pair phase inverter, a more high-fidelity network that distorted less of its own accord while feeding the signal to the output tubes.

Other than this, each model had its own output transformer to drive the appropriate speaker configuration, as well as a few other quirky features that further distinguished them. As the big boys of the lineup, the Bassman and Twin were briefly given dual rectifier tubes to provide a stouter playing response and a full, bold low-end.

The 1956 tweed Twin featured here is an example that boasts largely original circuitry in a professionally restored cabinet. It rather inexplicably carries four preamp tubes rather than the three found in each of its siblings, even though the extra tube doesn’t enable any extra features.

Whereas each of the two channels on all the other models routed its high and low inputs to its own half of the first preamp tube - a low-gain 12AY7 - each of the Twin’s inputs had its own independent triode, rather than sharing between high-and-low pairs.

One could argue that this arrangement had an advantage if musicians used the combo simultaneously, as bands sometimes did back in the day. Otherwise, there’s little point to the addition. Perhaps Fender did it simply because it could, given the big Twin combo’s wider chassis.

Unlike most of its contemporaries, this Twin houses four tubes in the preamp section, not three.

One of the two Jensen Alnico 5 PM Concert Series speakers.

Regardless, the tweed Twin delivers a thick, articulate, dynamic performance similar to that of the other large combos in the range, with the added benefit of the extra cone surface that two 12-inch Jensen Alnico 5 PM Concert Series P12Q speakers bring, for a big soundstage and plenty of punching power.

The tweed Twin’s sonic foundations are quite different from the big, bold, semi-scooped spank of the blackface Twin Reverb, with which many players might be more familiar.

The narrow-panel tweed preamp topology and cathode-follower tone stack bring a little more thickness and midrange emphasis - and, some would say, a slightly more tactile playing feel - to a sound that can still be crisp and articulate when played clean, but which segues more easily into distortion, with an appealing blend of textured granularity and creaminess to its overdrive.

Interestingly, Clapton’s use of the combo over the years has taken him full circle to the amp with which he logged his first truly groundbreaking recordings: the Marshall Model 1962. He used that combo on the sessions for the 1966 John Mayall album Blues Breakers with Eric Clapton, which is why that amp has been known as the Bluesbreaker combo.

Derived from that Fender 5F6A tweed Bassman schematic, and loaded into an open-back 2x12 combo cab with dual 12-inch Alnico speakers (Celestions, rather than Jensens, of course), the Bluesbreaker was the mid-’50s Fender Twin’s kissing cousin, and they yield remarkably comparable playing experiences.

If anything, the tweed Twin’s cabinet construction, and its lightly attached “floating” speaker baffle in particular, can make this the more lively and resonant of the pair.

In 1958, Fender gave the model another two output tubes, a larger transformer, a middle control and a long-tailed-pair phase inverter to create the mighty “high-powered” tweed Twin, an 80-watt monster that paralleled the Bassman’s advanced circuit, albeit with twice the wattage, in a 2x12 combo.

The big Twin would never look back, and the combo would forever after be among Fender’s most powerful amplifier models. But many players will tell you that nothing beats the delectable dynamics and easy grind of the earlier low-powered tweed Twin.