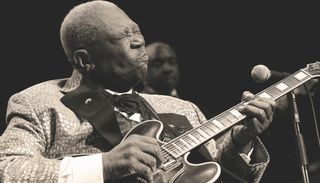 We collected some wonderful quotes from B.B. King's many interviews with Guitar Player writers during the magazine's close relationship with the blues great. Here are some of his thoughts that we published in The Guitar Player Book.

“T-Bone Walker has a touch that nobody has been able to duplicate. He seems to scrape his pick across the strings - how he hits specific strings, I just don’t know! He was the first electric guitar player I heard on record, and he made me go out and get an electric guitar.

"He used to use a lot of horns, too. They made a beautiful sound - like shouting in the sanctified churches. He also had a good rhythm section. And, to me, T-Bone seemed to lay right in-between there somewhere. That was the best sound I ever heard."

“Blind Lemon Jefferson played solo-acoustic guitar, and his way of executing left you with the feeling that you could hear someone else backing him up. Bill Jennings used to play in Louis Jordan’s band, and his rhythm was so even and driving. You know, once you start a beat to going real good - keep it. That’s what he did so well.

"Johnny Moore played a big Gibson Super 400 with [pianist] Charles Brown, and he used to put in quite a few chord changes - things like big, fat 9th chords. They were really modern changes, but they always fit what he was doing. He would even slide into chords sometimes, and give a good, bluesy feeling to a ballad."

“Earl Hooker was the best slide guitarist I ever heard. He always knew exactly what he was doing. For instance, take a truck driver, tell him to park next to the curb, and he knows exactly where to put the rig. That’s how Earl Hooker played."

“Of course, Charlie Christian was amazing. I first heard him in 1941 or ’42. He was a master at diminished chords, and a master at new ideas, too. And he was kind of like a governor on a tractor. If a tractor is bogging down in the mud, the governor will kick in and give it an extra boost. Christian was the same way.

"When the band would hit the bridge, he would keep the whole thing flying and get it really taking off. Charlie didn’t fluff notes much, either. A lot of us slide into notes because we aren’t sure. Like, if you want to hit a Bb, you hit a B, and slide down into it, or hit an A and slide up. But Charlie Christian knew. He was so sure.

"I could go on and on, but, you know, I’m influenced by anybody I hear. I don’t think I’ve ever heard anybody play something that didn’t intrigue me at one time or another.”

"Now, you don’t want to play like B.B. King or somebody else. You want to be you. So what you do is listen to me and anybody else you like. I won’t use the word ‘steal,’ but try to ‘borrow’ a little bit from each guy. And, like that, you become you.”

“I was at the Apollo Theater one time, and a critic gave me one of the greatest compliments anyone has ever given me. He said, ‘B.B. King sings, and then Lucille [King’s guitar] sings.’ That made me feel very good, because I do feel that I’m singing when I play. That’s why I don’t play a lot of notes like some people. Maybe that’s the reason most of my music is very simple - that’s the way I sing.”

On How To Play The Blues

“The big mistake about people in the blues is they seem to think you have to be high, completely smashed or stoned out of your head to be able to play the blues. And I don’t think a guy has to wear patched trousers, either. That image is what people seem to put on us, and it’s wrong.

"We are part of each other, you know. When one person is hurt, it hurts me, too. When I see their condition, I know what they feel, and I feel it. And it hurts.”