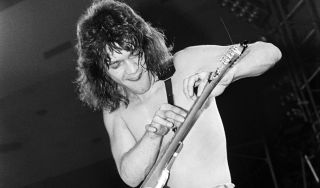 Recently, we took a look at what we call “The Eddie Van Halen Scale,” a symmetrical, three-notes-per-string pattern that he uses for both major and minor keys.

In this second of our three lessons, we look at Ed’s ferocious tapping technique. His deft use of tapping includes a range of variations and embellishments, such as pedaling, slides, bends and harmonics, all of which we include below. So let’s get started!

Tapping - which is shown as (+) in notation, and “T” in tab - involves using a pick-hand finger to sound a note by hammering on it. When Ed taps, he uses the index finger, keeping it straight for maximum control. (You could also use your middle finger.) He also palms his plectrum, so that he can easily switch between tapped passages and conventionally picked lines.

Figure 1 is inspired by “Eruption.” To play the first measure, keep your fret hand’s 1st finger depressed on the 5th fret E throughout.

After each 12th-fret tap, sound the E by pulling off to it with an upward flicking motion of your pick hand, then hammer-on the 8th-fret G with your 4th finger. Repeat. The second measure of Figure 1 is based on a B triad (B-D#-F#) and played the same way.

Another EVH tapping approach involves pedaling. In Figure 2, the fret-hand pitch, G, remains constant (the pedal), while the tapping finger plays an assortment of notes.

Figure 3 demonstrates an opposite approach. The tapped note remains stationary while the fret hand’s notes change.

Figure 4 follows suit with a descending line similar to Ed’s final taps in “Eruption.” You’ll also hear this move in “You Really Got Me” and “I’m the One,” where each in-position triplet is played twice, then in a descending fashion like Figure 4.

Ed also plays slides and bends with his tapping finger. Figure 5 illustrates some tapped slides, similar to those heard in “Ice Cream Man,” “On Fire” and “You Really Got Me.”

Figure 6 demonstrates Ed’s bend-and-tap technique as heard in “You Really Got Me,” “Panama” and other songs.

Begin by bending the 4th-fret B with your fret hand’s 3rd finger. Then, keeping the bend held, tap the 9th-fret E (sounds as F#) and pull off to the 4th-fret B (now sounds as C#).

For the last note, tap the 12th fret with your 1st finger as your fret hand bends from the 4th fret; vibrato with your fret hand. Also, instead of picking the first note of Figure 6, you might try sounding it by flicking the string with your tapping finger.

On the acoustic solo piece “Spanish Fly,” Ed plays tapped harmonics, but it wasn’t until Fair Warning that he used this technique with his trademark electric sound, most notably on “Mean Street.”

In Figure 7, after playing the 5th-fret C, lightly tap the string - don’t push it to the fretboard like you would a standard tap - 12 frets above (the fret in parentheses), generating a pitch an octave higher.

Figure 8 combines tapped harmonics with bends. Here you’ll need to quickly touch and remove your pick hand’s fingertip to generate each harmonic. The bends, meanwhile, will be executed with conventional fret-hand technique.

When tapping, Ed often uses symmetrical patterns between strings. In Figure 9 (similar to the “Hot for Teacher” intro), the first note on each string is played with a 12th-fret tap.

As you hammer-on/pull-off the notes at the 4th and 7th frets (use your 1st and 4th fingers, respectively), make sure your fingers don’t accidentally hit the neighboring strings.

Inspired by “You’re No Good,” Figure 10 uses this approach within a 5th-position A minor pentatonic (A C D E G) box. To play the last notes, simultaneously tap the 2nd string (15th fret) as your fret hand bends the string a whole step.