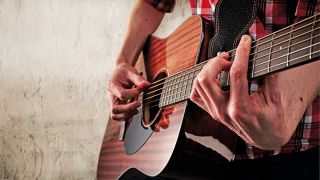 The opposable digit sticking out from our human hands is a miracle of evolution essential to playing any guitar style, especially fingerstyle acoustic.

Dropping the standard pick allows the thumb to work in myriad ways that can help make your playing as unique as your fingerprint. Free your thumb and fabulous fingerstyle will follow. Here are five tips to help you along.

The standard method of playing with an “educated thumb” requires the ability to keep a rudimentary bass line going on the lower strings while plucking out a syncopated melody on the treble strings.

Check out the music of “Mississippi” John Hurt or Chet Atkins for source material. Use a thumbpick for stronger attack, the thumbnail for a medium attack or the fleshy tip of the thumb for a softer touch.

Even rudimentary playing with an educated thumb requires copious practice to manage multiple parts. But don’t despair. Plenty of excellent material can be played with an elementary thumb.

Many fantastic blues players, such as R.L. Burnside, use a simplified technique where the thumb thumps along in the low end on the downbeat in a particular rhythm, or whenever is clever, while the fingers pluck melodic licks over the top, often using a slide in an open tuning.

Luther Dickinson learned straight from the masters. He helpfully explains that, “as complicated as fingerstyle can get, it can be broken down into two motions: pinching, where thumb and a finger are striking together, and then any number of back-and-forth syncopations of alternating thumb and fingers.”

3. Lead With the Thumb

Maybelle Carter, the founding mother of country guitar, played with an adaptation known as the Carter Scratch, whereby the thumb (equipped with a thumbpick) carries the melody, while the index finger (with a fingerpick) strums chord accompaniment. Her playing with the Carter Family laid the blueprint for what became a common style.

One of the most free-feeling techniques involves plucking notes on lower strings with the thumb, followed by a cascade of fingers rolling in either direction, most naturally from fingers three to one, but also from one to three. Incorporate the pinkie when you’re feeling especially adventurous.

Modal tunings are particularly cool because they facilitate a vast drone, and the lack of a third in the tuning equates to practically no wrong notes on the fretboard. Check out the “free raga” style of American primitive players such as Robbie Basho and Richard Osborn.

4. Use the Thumb Pick

Any bass player will testify that the thumb rules for creating big, strong notes. Practice playing melodies in positions up and down the fretboard strictly with the thumb, and see how it automatically keeps you from noodling. Grow a bit of a thumbnail to take full advantage of the various plucking approaches natural to the thumb.

Anchor your hand with the fourth and fifth fingers near the lip of the sound hole while plucking notes with the thumb, and notice how the lack of any palm muting allows the sympathetic resonance of various strings to enhance the plucked melodies.

Percussive fingerstyle playing requires different thumb techniques. One essential move is learning how to use the thumb like a drumstick to create percussive sounds on the strings or body.

Produce the “thumb snare drum” popularized by Andy McKee by whacking the top with the side of the thumb, with a focus on the joint between the sixth and fifth strings.

That same motion and fulcrum focus is also great for hitting a single string percussively. Do it near the sound hole for a full sound, or use the upper region of the fretboard as a springboard, for more “pop.”

Use a finger to pull up on a higher string, and you’re doing what funk-bass pioneer Larry Graham from Sly & the Family Stone dubbed “thumpin’ and pluckin’.”

For a strictly percussive sound, the same whack attack can be used anywhere on the guitar top. Experiment with your particular instrument to find a host of different tones and resonances.