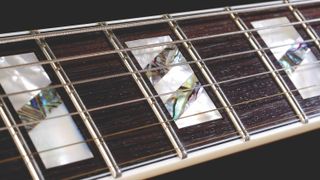 Pick up two guitars that are otherwise identically constructed – same neck profile, fretboard radius, pickups and hardware, same type and gauge of strings even – but which are made to a 24.75" and 25.5" scale length respectively, and you are likely to find yourself playing a little differently on each.

That mere three-quarters of an inch makes a surprising difference not only in the feel of the strings under your fingertips, their pliancy or apparent “elasticity,” but in the way you finger lead runs and voice chords, too. Such a variation in feel is likely to have you subconsciously altering your style, if only slightly.

2. IT SHAPES THE FUNDAMENTAL VOICE OF YOUR GUITAR

Whether your guitar is hardtail or vibrato-loaded, set-neck or bolt-on, humbucker or single-coil, its scale length influences the character of its sound before any other components even get to join in the game. The scale, which basically equates to the distance between the nut and bridge saddles, determines where the strings’ overtones or harmonics occur (and how tightly packed they are), and therefore literally determines the voice of the guitar in the most fundamental way.

The greater spacing of harmonics on strings that span a longer scale gives an impression of greater chime and shimmer, and yields a tighter low E. Alternately, strings on a shorter scale instrument yield more closely packed harmonics and increase warmth, thickness, and “fur” in the tone.

3. NO, REALLY, SCALE LENGTH HAS A MAJOR IMPACT ON TONE

So much so that we need to make this one a two-parter. When we talk about the overtones affected by scale length, we mean all the harmonic elements that make up the sound of any note, not just the harmonic nodes (or “natural harmonics”) you play by lightly touching a string above the 5th, 7th, or 12th fret.

Try playing one such harmonic on the low-E string at the 5th fret, but instead of just letting it ring, run your finger down slowly from there while picking steadily, still just touching the string lightly. Hear all those harmonics popping out? These occur all over your strings, and even when you fret a note they chime in to make up its more complex voice.

4. CHARACTERISTICS OF SCALE LENGTH CANNOT BE TRICKED OR CHEATED

The inherent tonal character of different scale lengths is the main reason that it’s very difficult to “fake” one major maker’s tone with the guitar of another. Since Gibson largely uses the 24.75" (actually closer to 24.6") and Fender 25.5", we tend to associate these “sounds” with those classic makers. Put a Strat-style pickup on an SG, or coil-split an SG’s humbucker, and it will sound like an SG with a single-coil pickup, not anything very close to a Fender Stratocaster.

Other factors, such as wood and hardware are at play, of course, but the different scale lengths in these guitars make it impossible to ever quite get the shimmer, chime, and firm low end of a Strat out of an SG, and vice versa.

5. BUT IN SOME WAYS, YOU KINDA, SORTA, ALMOST CAN

String tension and length operate together to determine harmonic content, as well as feel. If you want to warm up a 25.5" scale guitar, you can try tuning down a half step, which thickens up its overtones and makes it sound a little closer to a 24.75" scale guitar.

Dropping the tuning to Eb, as Jimi Hendrix occasionally did, also softens up the feel of the longer-scaled instrument and makes it easier to play. Dropping its tuning and changing to strings of a heavier gauge, as Stevie Ray Vaughan did, thickens up the tone while retaining the tighter playing feel.