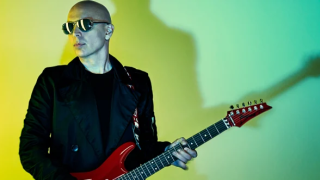 Once upon a time, your favorite guitar virtuosos were novices, honing their chops and struggling through the same challenges and problems every beginning guitarist goes through.

Well, what if they could tell you what roadblocks they encountered and how they got around them?

Better still, what if they could provide you with their very own exercises designed to build chops in that particular area?

It would be awesome. And that’s exactly what this lesson is all about.

Over the next pages, Steve Vai, Mark Tremonti, Joe Bonamassa, Mike Stern, Yngwie Malmsteen, Paul Gilbert, Alex Skolnick, Joe Satriani and Eric Johnson share stories about their own efforts to build their chops and provide you with short exercises that will help you develop relevant techniques.

So get out your guitar and get ready to build your chops with the best players in the business.

I would get extremely disciplinarian with myself when it came to building chops. When I would sit down to practice a lick, like the one here, I’d tell myself, “Until you can play this lick properly, you will not get up, eat, go to sleep.” That’s a pretty intense thing for a 14-year-old boy to do—it’s a reflection of a psychological imperfection, actually, or a crack in the cosmic eggshell. I was very intense about it. I don’t need to sit and practice for 10 hours a day anymore, but I do try to be as proficient as possible.

The exercise that helped my alternate picking the most was one I got from the first Paul Gilbert video, Intense Rock. That helped me to get that upstroke across strings really tight, so I could flow through three-notes-per-string scale patterns ascending. Problem is, I became twice as good ascending scales as I was descending, so I then had to work in both directions to get my upstrokes and downstrokes equal. It’s important that you practice it in both directions.

As a singer, you warm up and then warm down, and I like to think of the guitar in the same way. And if you’re playing four-hour gigs, like I do, you often wake up the next day with cramped-up hands and fingers. So, to get the cobwebs out, I like to use what I call the “Andy Summer Exercise.” I play a three-string sus2 shape moving up the neck, hitting all the natural roots in the key of C, and then repeat it on the accidental roots—the sharps and flats. I also do it with the roots on the 5th string. Doing the exercise in this manner, rather than just chromatically, makes you pay attention a bit more, and keeps you from just mindlessly noodling.

When I was 22 in 1975, I was doing gigs with Blood, Sweat & Tears where we were playing really fast tunes, and I was trying to play more like Jim Hall and float over the time. But then Jaco Pastorius said to me, “Man you’re going really slow and trying to hear everything you play, which is great, but at this point you’re ready to ‘hit up against the time’”—or play eighth and 16th notes right with the time.

So I went back and practiced playing a tune like, say, “Donna Lee,” with a metronome, and each day I’d click up the metronome a bit. Another thing I did was take classical pieces and, as an exercise, play them way faster than they’re supposed to be played.

And remember, with chops all you can do is develop your potential. But what’s beautiful about music is that someone’s style or voice is defined as much by what he can’t do as what he can do. Some people can’t play fast, so they play more melodically. I dig melodic playing, but I also dig the excitement in John Coltrane’s or Michael Brecker’s playing—it’s an obvious thing that people can relate to. West Montgomery, even, liked to work on his speed. He felt that it added variety to his phrasing. And it did.

Years ago, I recorded a band rehearsal on a slow tape machine, and when I listened to it the next day [on a machine at proper speed], I went, “Man! That’s fast!” I didn’t realize that something was wrong with the machine. After that, I started playing everything a lot faster. Like, if there was something I was originally playing legato, I’d want to be able to play it was alternate picking as well, completely coordinated and clean.

I played for about eight years without having any significant picking technique. It was all hammer-ons and pull-offs. For me, what it took was learning to use the metronome—slowing a repeating lick down to where I could do it perfectly, then gradually speeding it up. I learned a really simple six-note picking lick on one string, and within a couple weeks I could play it really fast.

But the hardest thing about fast picking is to go from string to string, so to improve at crossing the strings I practiced this one here, which gets progressively trickier with each section.

The biggest thing that’s helped me has been learning licks off records, as opposed to playing exercises from books. And over the years, I’ve developed quite a few licks into exercises.

One of the first was from Al DI Meola’s “Race with the Devil on Spanish Highway,” from Elegant Gypsy—the fast lick that everybody plays. It was very challenging, so I divided it into sections. The first descends in a quintuplet pattern [A G F# E D]; the next one is a four-note group [F# E D C#]. To expand the exercise, you can move the entire pattern up to the next note, B, and use the same rhythm pattern. Keep going up the scale, playing either the quintuplet alone or whole lick, and move it up and down as well as across the fretboard.

When you’re hammering on and pulling off, it’s all about accuracy, not brute force—you really have to pay attention to the way your fingers are moving. For instance, when I put my finger down on a string, do I feel that I have put it in the most efficient spot possible? Should the string be a little more in the center of my fingertip, or a little off to its side?

I used to find the perfect spot to hammer on and pull off—both on my finger and on the fretboard—and then focus all my energy on the movement required to get there. Doing that freed me up to really start whipping my fingers around in a musical rhythm.

The most important thing I’ve done for my chops is that I’ve always worked on my picking and fretting at the same time, so that whatever I play, it’s really clean. You can work on this with whatever you’re playing—it’s just a process of fretting a note right, picking the string right, and muting in all the right places. The key is to make sure you’re in sync, and if you are, the result is a nice, pure sound that really projects.