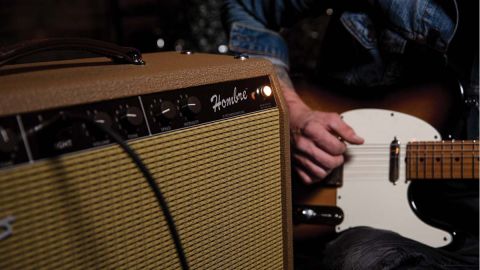 For players looking for a versatile all-in-one option with vintage mojo on-tap, a dynamic and musical tremolo and a price that doesn't water the eyes, the Suhr has got to be in the conversation.

In 1959, Fender switched from tweed to a brown Tolex covering for its combo amps. The Hombre is John Suhr’s take on the brownface Deluxe and the tones that have inspired him since his early days as a guitarist.

The Hombre features Normal and Bright channels, each with volume and tone controls. I found input 1 of both channels quite loud and full of gain. Even with my low-output Suhr Strat pickups, chords were breaking up slightly by five on the volume knob - a rich harmonic breakup, it should be noted.

A Les Paul–style guitar with P-90s positively roared, giving credence to Suhr’s belief that early ZZ Top records were cut through a brownface combo. Backing off the guitar volume cleaned things up nicely. The gain is mid-centric, giving the sound an apparent loudness far beyond what the wattage might indicate.

Plugging into input 2 cut the gain considerably and took a little edge off, without diminishing the volume very much or the quality of the tone at all. This input is a great option for those who like to get their grit more from pedals than from the amp.

Running ambient effects like delay and reverb in front of a highly driven amp can be problematic, and the Hombre has no effects loop. Fortunately, like the classic Fender two-input amps, it’s wired in a way that allows you to send your guitar signal into input 1 and then directly out of 2.

This feature let me easily set up a wet/dry rig by coming out of input 2 into delay and reverb effects and then into a clean Blues Junior for my wet signal. This way I could avail myself of the Hombre’s grit without going totally dry.

The Hombre’s period-correct bias tremolo creates the effect by modulating the bias of the power tubes. This sets up an interaction with your picking dynamics: When you play harder, the tremolo effect is less noticeable and becomes more apparent when you ease up. This kept the tremolo from obscuring my rhythm, and allowed it to bloom as chords sustained, making for a very expressive effect.

The Hombre excels as a rock and roll machine. Forget about effects. Plug a Les Paul into input 1, crank it up and channel your inner Billy Gibbons. Still, input 2 should make it equally attractive to a wide variety of players as a versatile grab-and-go combo.

With its flexibility, boutique-level parts and construction, and a price that’s a little more than half that of a vintage original, the Hombre earns an Editors’ Pick Award.