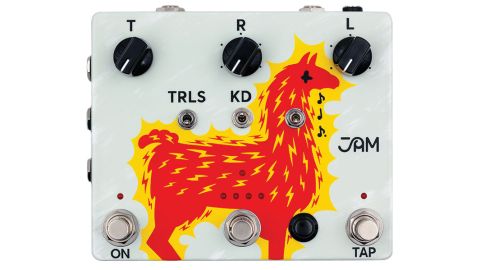 The Delay Llama delivers on its promise to take analog delay to new extremes, but retains an extremely musical tone no matter how it's set. It's packing a host of great ideas, all superbly executed.

In case you haven’t noticed, Greece has become a hotbed of pedal development, with Crazy Tube Circuits, Tsakalis and Jam Pedals among those creating the new stomp boxes showing up on a plethora of pro pedalboards. JAM Pedals has seen its product adopted by a who’s who of guitar stars, including Bill Frisell, John Scofield, Julian Lage, Jonny Lang, J Mascis, Nels Cline and many others.

Xtreme uses three 3205 BBD chips, for a maximum of 800ms delay time. As an analog/digital hybrid, it allows four presets and tap tempo with subdivisions. Holding down the tap-tempo switch sends the effect into Hold mode. Depending on where the internal regeneration trim pot is set, this can produce sound-on-sound or runaway feedback effects.

A kill-dry switch lets you use the effect 100 percent wet in a parallel effects loop and/or maximize some of its wilder effects. Another switch selects buffered or true bypass, and inputs for an expression pedal or control voltage (CV) source, remote tap tempo and remote preset selection are on the pedal’s left side. The expression input only controls the delay time, and while that can create interesting effects, an option to control the wet/dry mix would be welcome.

The four Xtreme modes work by shifting the delay time in a controlled manner. Vibrato uses sine-wave LFO modulation and offers control of depth and speed. Playing with the two parameters, combined with the delay length and mix, served up a sumptuous feast of analog vibrato varieties, from a form of chorus to (with the dry signal killed) some seasick wobbles.

The Tape-Age mode is said to emulate the slight and random pitch variations, i.e. warble, of a worn tape in vintage echo machines. To my ears the result sounded more like the vibrato setting of a Deluxe Memory Man, which is not a bad thing. In Random mode, the time value of the repeats changes over fixed increments, resulting in abrupt pitch and rhythmic changes. I found this setting most fun if I killed the dry signal, set a short delay and let chaos reign.

Pitch-Shift mode provides five groups of pitch-shifted intervals selected with the feedback knob, and five playback patterns chosen with the level knob. The last pattern is a five-mode sequencer that produces a series of multiple predetermined pitches in a specific sequence.

While these are not user editable, you can get variations by turning the feedback/interval knob. If you use the CV input to clock the delay time with a sequence of voltages that generates a desired interval, you can turn the repeats into a programmable sequencer.

As you can see, the Delay Llama Xtreme is deep, but the controls are largely on the surface and make all the pedal’s features easily accessible. There are other delays on the market that offer similar options, but the Delay Llama’s pure analog signal path ensures that no matter how extreme the effects are, they sound gorgeous.