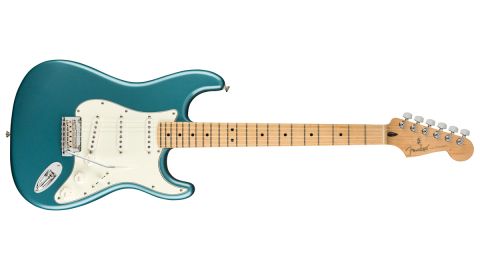 A nice-playing Strat that delivers a lot of bang for the buck.

Introduced this past July at the Summer NAMM show, the new Player series guitars seek to lure younger guitarists to authentic Fender sound and vibe. To make the gateway as appealing as possible, they include some thoughtful updates, such as modern C-shape necks carrying 22 frets, Alnico 5-magnet pickups (some models have Alnico 2 or Alnico 3 magnets), and sleek bodies that are hand shaped as per “original specifications.”

The guitar line (basses are also available) centers on Fender’s enduring classics, namely the Jaguar, Jazzmaster, Telecaster and Stratocaster. The series offers three versions of the Telecaster and seven of the Stratocaster. The latter include the HSH (two humbuckers, one single-coil), the SSH (two single-coils, one humbucker), the Plus Top (with a figured maple top available in Aged Cherry Burst or Tobacco Burst), the HSS Plus Top, the Floyd Rose HSS, and the standard Stratocaster on deck here, which is available in right- and left-hand configurations.

Finished in an attractive blue color called Tidepool, the Player Stratocaster is both eye-catching and fun to play. (It’s also available in Sonic Red, Sage Green Metallic, Polar White, Buttercream, Black, and Sunburst.) The neck shape, being neither overly thick nor thin, is probably ideal for the majority of players, and the slightly flatter radius of the maple fretboard (pau ferro also available) allows the action to be set a bit lower than would be possible with a standard 7.25-inch radius. Thumbs up to the carefully finished medium-jumbo frets as well as the silky satin finish on the back of the neck, which provides a supple surface for your hand to slide on.

Playability was excellent right out of the box (literally, as this guitar doesn’t come with a gig bag), and the intonation was solid and musical throughout the reaches of the neck. Once the strings were stretched out, the two-point vibrato bridge returned to pitch consistently under moderate bending. While not something that directly impacts playability, the hand-rounded contours of the alder body are a nice touch and give this guitar a pleasantly svelte, nimble feel.

The electronics also received some updating, and here we find a trio of Player Series Alnico 5 single-coil pickups with staggered poles riding in a triple-layer pickguard. They were properly adjusted for height and tilt, with the bass sides lowered for a balanced response across the strings. The control scheme features a master volume along with two tone knobs — one for the neck and middle pickups and another for the bridge unit. A five-way switch provides all the usual pickup combinations: neck, neck-plus-middle, middle alone, middle-plus-bridge, and bridge.

Plugged into a Fender reissue Deluxe Reverb (with hand-wired circuitry by George Alessandro) and a new Mesa/Boogie Fillmore 50 combo, the Players Series Strat delivered all the sonic highlights you expect from this timeless classic. Whether digging in with a deep clanging tone on the neck pickup, getting funky on the chiming neck/middle and middle/bridge combos, or slamming down heavily on the bridge setting, these pickups carried it all with their sweet balance of clarity, body and output.

I dug the bridge pickup’s gutsiness and sustain though the Mesa Fillmore 50 on a gained-up setting, and often just left it in that mode when playing with an alt-country band, using the guitar’s volume control to go from gritty clean to fat, twangy overdrive. No surprise that it also sounded great through a variety of distortion and fuzz pedals when fed into the Deluxe Reverb. Being able to tame the bridge pickup’s brightness via the dedicated tone control is the bomb for buttery lead sounds. With the range of textures available from all the pickup combinations, this guitar and a high-gain amp is really all that’s needed to cover a lot of gigs.

Fender knows the audience it’s aiming for with the Player series, and based on the performance of our review Stratocaster, it’s hit the bull’s-eye. Sure, there will be those who’ll knock some of the non-1950s aspects of this guitar, but I say try it before you deny it.