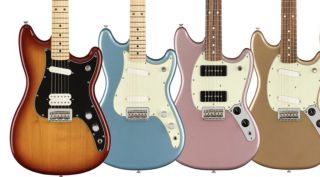 Back in 2018, Fender replaced its Mexican-made Standard line with the Player series. Mixing classic designs with modern features and a mid-level price, the guitars were perfect for players looking for a true-blue Fender - in looks and tone - at a wallet-friendly price.

Now, Fender has added four new guitars to the Player range - the Mustang, Mustang 90, Duo-Sonic and the Duo-Sonic HS.

You can read more about each of the new guitars below.

The Mexican-made Mustang features an alder body, and a maple neck and fingerboard with 22 medium jumbo frets. In the sonic department, it packs three single-coil pickups.

The Player Mustang 90 features a string-through-body and P90-style pickups, perfect for a more hot-rodded and gritty sound than what one would get with a typical Mustang.

The Player Duo-Sonic HS features a choice of maple or pau ferro fretboards, a 24" scale length and a humbucker that can be split for single-coil sounds.

For more info on the Player series, stop by fender.com.