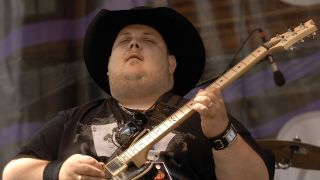 “When I first heard guys like Ricky Skaggs, Marty Stuart and Jimmy Olander playing with B-benders,” recalls Johnny Hiland, “I didn’t know what a B-bender was. I learned their licks without a bender, and that really helped me develop precise bends.” That’s the truth. At an exclusive lesson for GP at Prairie Sun Studios, Hiland demonstrated some of his gorgeous, sick and twisted bends.

“I got to the point,” he says, “where I would take any scale and bend all the notes.” He then goes through Ex. 1 in A major. This is trickier than you might think, thanks to all the wound-string bends, some of which he executes with only his index finger.

“I found I could take an Asus2 and bend up to the major 3rd,” says Hiland as he plays Ex. 2. “This is actually moveable,” he explains, and finishes the lick with sweet bends that end up on a great-sounding A7 voicing. Hold the notes on the D string super steady and yank the G string toward the ground with your third finger (supported by your second).

Hiland then demos the licks in Ex. 3, variations of which can be used to flesh out a 12-bar blues in A. He adds some muted notes in the 1st bar to keep things clucky and throws in some tangy minor seconds over the D and E chords.

One of his coolest licks was how he navigated a move to the IV chord in a country shuffle in C, in Ex. 4. “When I get to the F chord, I bend the F note up a whole tone, then I bend the C up a whole tone. Then I grab the A, bend it a half-step up to a Bb and bend the C under it up a whole-step. Then release them both and land back on the Fchord.” To execute this, you’ll need to bend the string toward the ceiling while you pull the string in the opposite direction toward the floor. If you nail it, though, it will create one of the dreamiest sounds ever, with one chord melting and morphing into the other. Bend it like Hiland!