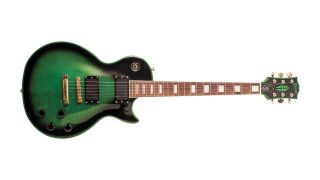 I was doing research for one of my Whack Job columns when I came across a link that lead to a link that lead to some thumbnails – but no shots of the headstock – of a brand new, green Les Paul with a price of $225, shipped directly from China. Hmm. We’ve all heard about counterfeit guitars, so for a $225 gamble, I decided to see if this was one of those knock-offs.

The guitar arrived by courier in a black sedan – all very Men In Black-ish. I opened the sealed, toxic, styrofoam sarcophagus, and, sure enough, right on the headstock is the Gibson logo. Etched into the trussrod cover is “Les Paul Custom,” and on the back of the headstock are the words “Made in U.S.A.”, along with an embossed nine-digit serial number. Very credible. Very wrong.

As you might expect, this guitar is straight-up crap. The frets are scratchy, the fingerboard is dry, and it won’t stay in tune. The pickups are low-output, anemic, and microphonic as all hell. Suspicions confirmed. These guitars are frauds. They may look authentic and cool from a distance, but they will never play with the class and distinction of the real thing.

My counterfeit job is of an actual, limited-run model the Gibson Custom Shop produced in 2012. Gibson made 35 of what they called “The Green Widow,” and the retail price was around $16,000. I guess I got a deal at $225, but then again, it might take an investment of $1,500 or more to get the faux green widow to play and sound almost as good as a starter Epiphone. But, of course, no amount of tech work could “fix” the sense of feeling dirty for having a fake in my possession.

SO GUESS WHAT I DID?

Well, the $225 was a good investment for me, because I now had first-hand knowledge of how cosmetically realistic these copies can be. But I didn’t want to keep the guitar, or donate it to a needy kid or organization, because I didn’t want the fake to exist any longer. I decided to smash it.

I thought about the many ways to do it – such as gift it to a Who tribute band for its auto-destruction reenactments – but Ryan Strader, who works at the Starving Musician in Santa Clara, California, won the prize. Ryan suggested putting it under a 20-ton compressor, and filming the “execution.”

And that’s what we did. At an undisclosed location, we snuck this aberration of a guitar into a machine shop, plugged it into my 50-watt Marshall JCM800, and proceeded to send this bogus baby back to the screaming-banshee hell cave from whence it came. No tears.

SAY NO TO THUGS

Counterfeits of Gibson, Fender, Gretsch, Rickenbacker, PRS, Martin, and other models are rampant. I’m sure the manufacturers know about these websites, but it must be brutal to try and stop offshore fakes. Don’t buy from these crooks – unless, like me, you’re plotting a merciless slaying.

Feel free to contact me at rtcarleton@gmail.com with photos of your rare weirdos.