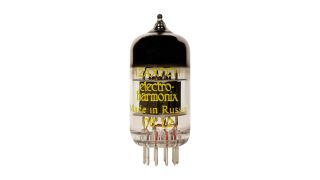 When I first started working for the U.S. distributor of Marshall amps 38 years ago (man, that was hard to write!), my boss warned me that tube amps weren’t going to be around much longer. He reasoned that very few products that used vacuum tubes were still being manufactured, and there just wasn’t enough business to keep the tube factories going.

During the Fifties, tubes were used in every consumer electronic product, including radios, TVs, and audio gear, but by 1978 the transition to solid-state was in full force, and tubes were found mainly in some guitar amps and high-end audio components.

During that time, most U.S. and European tube manufacturers either sold or were going to sell their tube-manufacturing operations to Asian or Eastern Bloc companies. Fortunately, the manufacture of tube guitar amps has enjoyed a healthy resurgence over the years, and interest in new amps and maintaining old amps is keeping tube factories operating in Russia, China, and the Slovak Republic.

Although they don’t make tubes quite like they used to, the good news is that multiple brands and versions of just about every tube you will ever need for a guitar amp are currently being manufactured. The not-so-good news is that the quality can vary from month to month and from production run to production run. Many tube merchants test and match their tubes before selling them, but the quality of the testing and matching is not consistent from supplier to supplier. There are too many versions of guitar amp tubes to discuss here, so I’ll focus on the ones I prefer.

12AX7: Since this is the most common tube in guitar amps, a wide variety of brands (including some resurrected old brands) are available to choose from. In Colby and Park amps, I use Tung Sol, Chinese, and JJ 12AX7 tubes, as well as the Sovtek 12AX7LPS. I typically use Tung Sols in the first preamp stage because they have a warm sound. I use JJs in tone driver/cathode follower stages and tube effect loops because they can handle the high cathode voltage. I also like Chinese 12AX7 tubes in the phase inverter because the bright tonal character adds a nice bite. The 12AX7LPS sounds great in the dtb50’s overdrive channel. All of these brands tend to be reliable, although I get bad ones from time to time.

EL34: The Electro-Harmonix EL34 is a good choice that sounds great and is reliable. JJ EL34 tubes are very reliable and sound good too, but be careful to get EL34 tubes and not E34L tubes unless your amp was specifically designed for them. Tung Sols are good but a bit more expensive. Winged Cs are much more expensive, and since they are not being manufactured any longer, most that are still available come from the last production run and are of questionable quality.

KT66: I use Gold Lions, which sound very good, put out the right amount of power, and are not expensive.

KT88: The Sovtek KT88 sounds very good and is not expensive. I’ve had a couple of failures, but the tone makes up for it. The JJs are very reliable, a little more expensive, and sound pretty good.

6550: I don’t use them in my amps, but Ruby 6550 tubes are highly recommended by techs I know and trust, especially for use in amps like Ampeg SVTs that put considerable high-voltage strain on the tubes.

6L6: TAD offers a few varieties, and I have had good success with all of them. I like their RCA clones, such as the 6L6GC-STR and 6L6WGC-STR, which is about the size of a vintage 5881. Ruby Tubes makes some nice 6L6s as well. All of these are Chinese tubes that were designed with the help of Ruby and TAD. The Groove Tubes GE 6L6 clone is a unique design that sounds great and reminds me of the vintage Sylvania 6L6GCs, but they aren’t particularly reliable. The Sovtek 5881 isn’t really a 5881 or a 6L6, but it’s still a great tube in its own right. It sounds good in many 6L6-based amps and is just about impossible to kill.

5Y3: JJ’s 5Y3 rectifiers are good, but they can rattle in a combo. The Sovteks rattle, and they put out too much voltage. Instead, I recommend buying NOS or even used USA 5Y3s. They were made in huge quantities, so they’re still available and not expensive.

5AR4/GZ34: I use either Sovtek or Ruby, which are both reliable.

Mitch Colby helped develop many Marshall and Vox amp designs and is the founder of Colby Amplification.