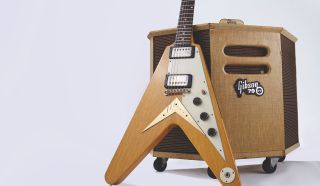 In 1957, Gibson president Ted McCarty decided that Gibson needed to restore its image as an innovator and industry leader.

In typical McCarty “take no prisoners” fashion, he made a series of bold moves that resulted in the development of several of the most desirable and valuable electric guitar models of all time, including the sunburst Les Paul Standard, ES-335, Explorer and Flying V, all of which made their debut in 1958.

The Flying V was one of several “modernistic” models that Gibson developed during that period. Sometime in 1956, McCarty hired artists outside of the company to come up with guitar designs with futuristic appeal.

“I told them what I wanted and asked them to make me some sketches,” McCarty told Andre Duchossoir. “We chose the ones we liked, and then we called in [guitar foreman] Larry Allers and John Huis and asked if they could make them. You can design anything on paper, but building and producing it is a different matter.”

Only a handful of the submitted designs made it to the prototype stage. Allegedly, mockups were built and three final models were chosen from those contenders.

Gibson filed patent applications for those three guitar body designs in June 1957, with the patents eventually being granted in January 1958. This was an unusual strategy, as previously Gibson had filed patents only for engineering inventions and not cosmetic designs.

Although model names were not submitted with the patent applications, the guitars became unofficially known as the Futura, Moderne and Flying V.

Of these three submitted designs, only the Flying V’s shape remained unaltered through the production stage. The Futura’s body and headstock were modified to that of the Explorer, and the Moderne never went into production.

Early prototypes of the Flying V and Futura/Explorer that were built for trade shows had mahogany bodies, but before the models went into production Gibson switched to African limba wood, better known as korina.

In addition to being lighter than mahogany, korina’s pale-blond color was more in step with the prevalent aesthetic of the late Fifties.

“No one else had a korina guitar,” Gibson wood expert Wilbur Marker told Duchossoir. “That was the novelty of the thing. It was very pretty. In essence, that is the reason why we went with korina.”

When Gibson displayed the Flying V and Explorer prototypes at trade shows in 1957, they certainly generated the desired reaction from dealers. But while Gibson re-established its reputation for innovation with the guitars, that did not translate into sales.

Most dealers thought that the models were a little too far out and space age, and those that did order them purchased only one instrument, which was generally used as a window display to attract attention.

Orders for the Flying V far outnumbered those for the Explorer, and Gibson decided to manufacture three batches (with each batch numbering 40 guitars) of Flying Vs and one batch of Explorers.

The hardware on these early Sixties models differs from the 1958–’59 models in several ways. They have hardware plated with nickel rather than gold, metal cap knobs instead of bonnet knobs, patent-number humbuckers rather than PAFs and a Tune-o-matic bridge with an early Sixties-style retaining wire.

Although very few Flying Vs were in circulation during the late Fifties, a few did manage to catch the eyes of performers like Lonnie Mack and Albert King, who immediately adopted the Flying V as their signature guitars. Mack added a Bigsby vibrato to his V, which he used to record “Wham.”

As a left-handed guitarist, King was attracted to the V’s symmetrical shape, which accommodated his unorthodox style of keeping the guitar strung for a right-handed player and flipping the instrument over.

The Kinks’ Dave Davies was another early adopter, although his use of the Flying V started much later, in 1965. According to Davies, the airlines lost his only guitar when he came to America on tour that year, so he stopped into a shop to get a replacement.

When he failed to find a guitar that he liked on the racks, the owner pulled from storage a dusty case that contained an original Fifties V. He sold Davies the V for only $60.

Davies’ Flying V became an iconic image of the British Invasion after he made several television appearances with it and was shown with the guitar on the cover of The Kinks' Greatest Hits! in 1966.

Demand for the rare and elusive Flying V suddenly increased due to its new exposure, which motivated Gibson to issue a new Flying V model in 1966.

This second version of the V had a mahogany body and neck, a larger pickguard, a modified headstock shape, a triangular control knob configuration and a traditional stop tailpiece or Gibson Vibrola instead of the V-shaped string-through-body tailpiece.

However, the new version was only marginally more successful than its predecessor. Just 111 of the guitars shipped in 1966, and the shipments decreased each year afterward, until the guitar was discontinued in 1970.

Jimi Hendrix was the most notable guitarist to adopt this second version of the V. In 1969, Gibson built a one-of-a-kind custom left-handed Flying V for him, featuring gold-plated hardware, a pearl Gibson logo headstock inlay and Trini Lopez–style split-diamond fretboard inlays.

Hendrix famously used his custom V to perform several songs at the 1970 Isle of Wight Festival. Keith Richards also caught many guitarists’ attention when he played a late-Fifties V at the Rolling Stones’ Hyde Park concert on July 5, 1969.

In 1971, Gibson produced the limited-edition Flying V Medallion model, which was essentially identical to the 1966 version, with the exception of its shorter peg head. The company produced only 350 Medallion Vs.

Demand for the Flying V reached critical mass in the Seventies as hard-rock and metal guitarists fell for its aggressive styling. Performing with UFO, Michael Schenker played a white 1975 Gibson Flying V, which he later decorated with a distinctive black-and-white “negative” mirror-image motif.

He got the guitar from his brother Rudolf of the Scorpions, who started collecting Flying Vs during the Seventies and today owns more than 100. Flying V players from the U.K. during this period included Mark Bolan of T. Rex, Uriah Heep’s Mick Box, Wishbone Ash’s Andy Powell, Bad Company’s Mick Ralphs and Chris Spedding.

In the United States, the V found its way into the hands of guitarists like Billy Gibbons, Rick Nielsen, Joe Perry and Paul Stanley.

Metallica’s Kirk Hammett and James Hetfield helped further the Flying Vs reputation as an iconic metal guitar during the Eighties, but the V has also remained a favorite of rockers like Lenny Kravitz, Grace Potter and Eddie Van Halen, who used his Fifties V to record several songs on 1984, including “Hot for Teacher.”

Today, the Flying V can be seen in the hands of players representing almost every genre of popular music, from country to punk and Detroit blues to death metal.

The guitar’s modernistic design was truly ahead of its time, but now that guitarists’ tastes have caught up to it, the V has become a timeless classic that, today, is considered one of the most successful and desirable guitar designs of all time.