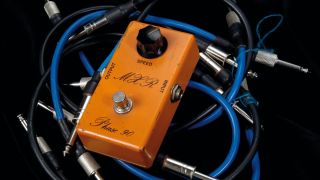 For a time in the 1970s, guitarists were using phase shifters like they were going out of style. Remarkably, while the effect lost some of its popularity in the decades that followed, it has remained a staple of the guitarist’s arsenal.

After all, why hack out static-sounding guitar tracks when a phaser can give them a stunningly three-dimensional swirling sound?

Maestro and Electro-Harmonix were among those that popularized the devices, but undoubtedly the most-loved phaser of its time was the MXR Phase 90.

More dramatic sounding than MXR’s Phase 45, more affordable and less obtrusive than the larger two-knob Phase 100, the Phase 90 hit the sweet spot, and it landed on a bucketload of classic recordings and touring pedalboards as a result.

Edward Van Halen smeared its tones all over Van Halen I, David Gilmour used one to add six-string sheen to Pink Floyd’s “Shine on You Crazy Diamond,” and Mick Jones slathered it on the Clash’s “Lost in the Supermarket,” to name just a few artists and recordings associated with the Phase 90.

At the heart of a phase shifter is a circuit that splits the incoming signal in two and reverses the phase of one strand by 180 degrees. A low-frequency oscillator is then applied to the signals, causing them to intersect at varying points along the frequency spectrum.

When the two signals meet, they are 180 degrees out of phase with one another and cancel each other out, creating a “notch” in the frequency. As the oscillator sweeps those notches up and down the audio spectrum, it produces the characteristic swooshing effect that these pedals are famous for.

The Phase 90 was the debut effect from MXR, which Terry Sherwood and Keith Barr formed in 1972 in Rochester, New York. Designed by Barr and released in either 1972 or ’74 (sources vary), the Phase 90 is a four-stage phaser, since it has four independent stages at which the signal’s phase is reversed, resulting in two modulated frequency notches.

The speed at which these notches are swept up and down the frequency spectrum is controlled by the Phase 90’s lone control knob.

Because the original MXR pedals were not true bypass, the input signal passed through the pedal’s buffer stage even when the effect was switched off, which caused it to suffer from tone suck.

By late 1974, MXR had introduced other pedals, including the Blue Box octave fuzz, Distortion+ and Dyna Comp compressor. Toward the end of the same year, the Phase 45 was released, followed by the Phase 100 in 1975.

These early pedals had their names and MXR’s logo silkscreened on their fronts in a distinctive script font. By 1976, all the pedals in the line were given more modern block-letter logos encircled by a black box.

By then, MXR was the pro choice among the many alternatives on the market. Unfortunately, the competition was massive, and that, among other factors, helped drive the company out of business in 1984.

Dunlop acquired the MXR brand in 1987, and has released several reissue renditions of the Phase 90 and other MXR favorites, as well as modernized phasers that pay homage to the original circuit, with conveniences such as contemporary DC power inputs, LED indicator lights and true-bypass switching.

But for purists, nothing except an original script-logo Phase 90 will do.