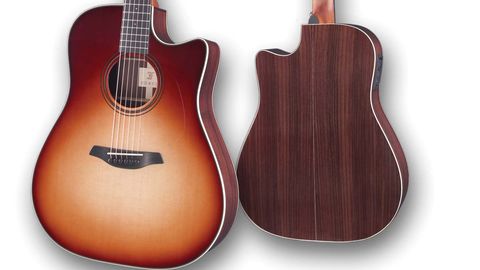 We like the looks, tone and the feel, with the soft V neck shape offering a tremendously comfortable ride. The Furch Dc-SR Green Master's Choice is a serious contemporary dreadnought cutaway.

Furch (pronounced “furk”) is a well-known European manufacturer that’s been making inroads into the stateside market since 2003.

Last summer, the company made a major commitment by opening its own distribution and service center on American soil.

So instead of arriving from the Czech Republic, as did the Red Plus OMc-SW reviewed in GP’s Holiday 2018 issue, the new Green Master’s Choice shipped from Tennessee with a First Edition U.S.A. emblem emblazoned inside.

Furch uses seven color designations to differentiate the body styles and features in the solid-wood production models that make up the Master’s Choice line: Among them, red represents the top, blue is the most affordable and green is in the middle.

The toffee-and-caramel burst on this review unit made me smile when I took it out of the box. I love the gradient of the unique hues and how the transparent pickguard, as well as Furch’s proprietary thin UV finish coating, let the whole top shine through.

Pick it up, and the instrument feels super sturdy and slightly on the heavy side. Perhaps that’s partially due to Furch’s Composite Neck Reinforcement System, which uses modern materials to reinforce the mahogany neck. The overall craftsmanship is nearly impeccable.

The only imperfection I noticed was in the cast on the tuners, and I had some issues getting one of them to loosen up at first.

Silky smooth playability from the factory action facilitates immediate satisfaction. It’s the kind of thing one might even turn to or recommend for the ergonomically-minded player who is nursing tendinitis. Long scale length leads to plenty of piano-like punch and sustain.

The frets are thin, but you might not notice because the playability is so versatile, inviting everything from delicate fingerstyle to traditional dreadnought strumming with a plectrum.

Working up and down the fretboard is an even experience, as the soft V profile feels consistent from the lowest to the highest positions. To my hands, the neck felt familiar - nothing unusual or fancy, simply straightforward and full.

The Furch Green Master’s Choice has a wonderfully balanced dreadnought tone. It hints at the bass of a Martin without being quite as boomy as some. The top is plenty present while not being quite as top heavy as a Taylor. The middle range is clear and present, with a slight scoop that makes it less traditional and more of a high-definition tone, compared to a run-of-the-mill Gibson.

In essence, the Furch combines various familiar elements while manifesting its own distinct voice. The onboard L.R. Baggs Stagepro Element system sounds bold and consistent from string to string, though it comes at the cost of a rather large preamp footprint.

My test amp was an AER Compact 60/3 T.E. A certain European elegance pervades all the Furch guitars I’ve tried, including this dreadnought cutaway, which is a very versatile instrument suitable for a wide range of top-tier studio and stage applications.

The Green Master’s Choice might not be my first choice for kicking out earthy Delta blues, because its look and feel are a bit more refined, but I would highly recommend that classically minded steel-string players check it out.

Everyone that tested it during the course of this review was immediately and thoroughly impressed. The Green Master’s Choice earns an Editors’ Pick Award.