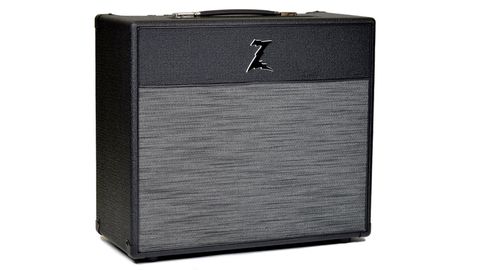 All in all, the Z Wreck Jr. is a real player’s tool for guitarists who like to work their amp as an integral part of the instrument, and we’re happy to say it’s worthy of an Editors’ Pick award.

Players snatched up those searing, touch-responsive rock machines as a means of attaining some semblance of the hallowed Trainwreck sound and playing feel at a fraction of the price. And as Dr. Z’s Mike Zaite tells Guitar Player, ever since then, guitarists have been begging him for a lower-powered Z Wreck. It’s finally arrived in the form of the Z Wreck Jr.

Otherwise, the front end is the exact same Trainwreck-inspired circuit that drove its parent into wailing lead tones. For that matter, the amp is built with the same roomy chassis upon which the big Z Wreck is rendered, and the combo comes in a full-sized 22 x 10.5 x 20–inch cabinet that gives the single 12-inch Celestion G12M Greenback speaker plenty of room to bloom and sing.

The entirety is spun together in a business-like, if stylishly menacing, blackout ensemble that features black Tolex, black control panel, black corners and a black ’n’ silver grille.

As per the Trainwreck approach — and that of most Dr. Z amps, for that matter — the front-panel features are pretty simple. Controls include just volume, treble, bass, master and cut, but Trainwreck fans will notice one significant surprise there already.

While Trainwreck amps were themselves produced on a vehemently non-master-volume ethos (even though Fischer himself published dozens of different and very effective master-volume circuits), Dr. Z has added a post-phase-inverter master-volume control (PPIMV) that lets users tame the amp’s output further.

Placed in the circuit between the phase-inverter tube and output tubes, this control has proved to be an able attenuator of many a powerful amp’s full bluster in recent years, exhibiting an admirable lack of tone suck in the process, and it’s something Dr. Z has added to several other models of late.

Inside the aircraft-grade aluminum chassis, the hand-wired circuit includes high-quality components across the usual thick phenolic turret board, using Mallory signal capacitors and metal-film resistors throughout. The transformers are likewise custom ordered and made in the United States.

Extremely neat construction is in evidence throughout, and includes the extra effort made in the original Z Wreck design to minimize wire runs for the shortest signal path possible, while optimizing separation between signal- and power-carrying stages.

Finally, one other minor point at which the Jr. diverges from the Z Wreck Sr. is in the rectification department. Its big sibling used a 5AR4 tube and included a two-way switch labeled speed/comfort, which set the tubes’ plate voltage levels for a playing feel that is tighter and faster or softer and more vintage-like, respectively. The Z Wreck Jr. uses a smaller 5Y3 tube and is preset to the comfort attack level, which early tests found was more appropriate to this design.

I played the Z Wreck Jr. with a Nik Huber Orca ’59 (a Les Paul–like single-cut with humbuckers), a Collings 360 LT-M with Lollar Jazzmaster pickups and a ’57 Telecaster, and I found it extremely rewarding throughout the clean-to-mean spectrum.

As the Trainwreck DNA demands, the amp excels at straight-in, guitar-to-amp playing, and delivers a tactile, responsive playing feel that becomes more a part of your own playing style as you work with it.

While amps of this type are generally lauded for their organic cranked and semi-cranked lead tones, the Z Wreck Jr. is actually capable of extremely sweet and musical cleans with the master maxed out and volume adjusted to taste. Not surprisingly, several shades of Vox-inspired twang and jangle are available here, all with a bountiful harmonic swirl with lots of beautiful sparkle and chime.

While this type of amp isn’t generally considered a “pedal platform,” the Z Wreck Jr.’s clean and edge-of-breakup settings interacted well with a Wampler Tumnus Deluxe, a Gas FX Drive Thru and a JHS Angry Charlie plugged into it for pedal-based overdrive. With the amp cranked up to its overdrive zone, though, the experience becomes even more enjoyable.

There’s a great blend of biting forward edge and gentle compression in the pick attack, which really enhances dynamics and the interactive feel of the amp, as well as easy, controllable harmonic feedback at the ready, even with the single-coil guitars. Dig in hard and it’s raucous and aggressive, yet the roar is easily tamed with a lightened pick attack or a slight twist of the guitar’s volume.

While the master control is effective and will make this amp more versatile for a wide range of players, it induces a little fizziness when set extremely low with the volume (gain) up high, which is par for the course. The Z Wreck Jr. really achieves its full sonic glory when you dime the master control and pump the output tubes hard to get the magic happening.

Even so, the master is a big bonus and works well for dropping output levels just enough to tame the Jr. for more constricted club stages. The amp will definitely punch out in front of your drummer, even when un-miked and with the master in the noon-to–two o’clock range. Full up, it’s a loud 15 watts!