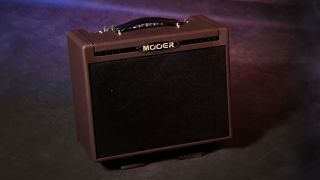 The SD50A features two separate preamp channels - which can be used for guitar and vocals or two guitars - plus a combination 8” FRFR speaker and 1” tweeter, a 150-second looper and drum machine, and Bluetooth capability.

In terms of sonics, each channel on the amp features its own EQ, reverb, delay and chorus effects - with 10 storable presets - plus tap tempo, anti-feedback switches and compatibility with Mooer’s wireless footswitch.

Elsewhere, the amp features a convenient kick-back stand, an onboard tuner, USB phone recording and an XLR DI output. It doesn't take batteries, and requires a power source to run.

For more info on the amp, stop by mooeraudio.com.