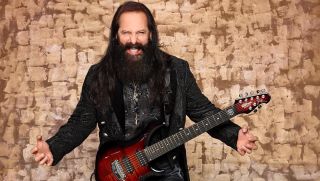 The title track from his upcoming solo album, Petrucci's first in 15 years, it reunites Petrucci with drummer Mike Portnoy. It's the Dream Theater co-founders' first recording together in over a decade.

“Having Mike play drums on this record was really special for me and he did an absolutely incredible job navigating the various styles and technical challenges my music presented in the way that only he can do,” Petrucci said in a press release.

“It was very cathartic for the both of us, I think, to be playing music together again after all these years and it really felt great! Mike’s spirited, intuitive and energetic playing truly helped to elevate these new songs to a level that I couldn’t be happier with.”

You can give "Terminal Velocity" a listen below.

Of the song "Terminal Velocity," Petrucci said “'Terminal Velocity' was actually the first new song that I wrote for the album when I entered the studio in March of this year. It stemmed from one of the many ideas and seeds that I had collected over the past several years.

“I literally began with the opening motif and built the rest of song from there. I think it’s a great lead-off single and nicely represents a few of the different stylistic sides of this record that I wanted to explore as a guitar player; the melodic/thematic side, the riffing side and the shred side.”

Terminal Velocity is set for a digital and streaming release - via Petrucci’s Sound Mind Music record label - on August 28. It will be out on CD and vinyl on October 30.

To preorder the album, step right this way.