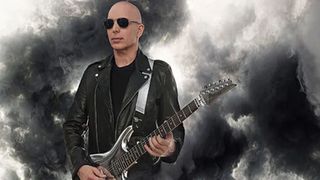 This is a classic interview and lesson column from Joe Satriani from the GP archives.

As you can see in ex. 1, the notes a, c, and e—the chord tones that spell an am triad—can be arranged in myriad ways. One challenge guitarists face is that there are typically several ways to finger the same chord or riff. For instance, notice that in this example, fingerings 3, 6, and 9 are completely different, yet produce the exact same chord.

What are the benefits of learning triads and other fingerings up and down the neck?

Well if you’re new to the guitar, it stimulates a realization that these fingerings show up everywhere, and in different keys, and if you had a guitar neck that was six feet long, you’d see the same fingerings repeating every 12 frets. Someone who grew up playing blues or metal might look at this approach and say, “I don’t know what the hell is going on here.” But to someone who grew up playing country, it might be very familiar, because one requirement of playing country is the ability to break chords out all over the neck.

What kind of musical backgrounds did your students have?

I had kids that were playing rock and metal, and adults and older professionals who were interested in the music of the ’60s and ’70s. I stopped teaching in ’88, so the resurgence of classic rock among teenagers hadn’t really kicked in yet—probably because there was a lot of serious guitar playing going on when I was teaching and kids didn’t have to look far to find adventurous playing. With grunge and hip-hop taking over, the ’90s were in some ways a wasteland for serious guitar, so that might have helped spur interest in classic rock guitar. Back when I was teaching, it was actually a bit disturbing to see that most players weren’t into classic soul or roots music, and only into what was current.

Could you steer kids toward roots music?

You suggest things for them to listen to, but unless they’re receptive to it, it doesn’t work. Eventually, though, they ask you something like, “How does Stevie Ray Vaughan get that sound?” and that’s when you get ’em. You say, “Well, listen to this old recording of Albert King bending notes on a guitar strung backwards,” and then they start to see how things evolved. That’s actually a good place to start, because that’s one thing most beginners screw up—bending.

How did you teach bends?

The simplest way was having them hit a note—say C on the 13th fret of the second string—and then drop down two frets and bend up to that same C using the fingers behind the bending finger for reinforcement [Ex. 2]. I’d say, “Grab the neck, let it act as a fulcrum against the side of your 1st finger, and rotate your forearm slowly until you bend up into the note. The point is to know where you’re bending to, and worry about vibrato later. Then add vibrato [Ex. 3]. Then practice the same approach on other notes, going up and down different strings [Ex. 4]. And realize that bends work differently on different guitars, particularly due to whether the guitar has a tremolo system or is a hardtail.

Did you have them do half-step bends too?

I thought that might be too much because, honestly, when a beginner sits down to do this, it sounds awful, and they know it too. How long are you going to put them through that pain? The most important thing is musical experience. A kid is lucky if he has an hour to practice, so I would rather see him do only ten minutes of these bending exercises, ten minutes of the chordal stuff we’ve been talking about, and spend the rest of the time playing music with a friend, along with a recording of some kind, or just by himself.

I saw this story on a boy who was a total musical whiz—he was about nine years old and already a classical conductor—and the interviewer was stunned when he said he only practiced about one hour a day because “practicing all day long doesn’t really make you a better musician.” I loved hearing that, because for years I’d been telling my students the same thing. I’d say things like, “Is your goal to get more familiar with the chromatic exercise, or to make music?”