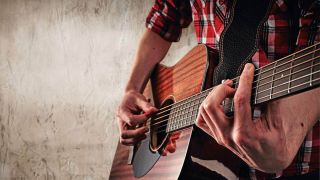 With the country's current health crisis, this is a fine time to use self-expression as music therapy, and an opportunity to turn to the trusty acoustic for help in maintaining sanity.

Interviewing Tommy Emmanuel about his songwriting and finally finishing up an album of original material has put my head in songwriting mode. An acoustic can facilitate anything from the heaviest riff to the most delicate classical composition, but too often it’s merely used to strum a few chords in common time and standard tuning.

That’s a sure-fire way to write something utterly mundane. What the world needs now is something heartfelt, and a little different. Here are a few tips to eschew the tried and true and discover music unique to you.

Connect With Your Muse

Heed Emmanuel’s warning: Don’t let your instrument dictate to your songwriting by allowing your fingers to go “like dogs straight for the food bowl.” Be a cool cat and allow inspiration to come.

Don’t move a muscle until something tells you to, and stop moving your fingers when they start falling back on the familiar. Endeavor to establish a truly creative connection. Your muse is unique. Listen, and your music will be as well.

You might not be able to play like Michael Hedges, but neither could his contemporary Will Ackerman, who once mentioned in a Frets interview that his connection was his currency. It didn’t matter that he couldn’t play like Hedges, as long as he was delivering his own message with meaning.

Mixing up the method of attack makes rhythms unpredictable, which in turn makes music more unique. Try strumming one part of a song idea, then plucking the next. If you usually play with a pick, mix in some hybrid picking, or if you’re feeling adventurous, drop it altogether. If you’re a fingerpicker by habit, try a plectrum for a change.

Tweak a Tuner or Two

A little turn of those metal keys attached to the headstock can open up a lot of fresh creative territory. Try raising the second string up a half step, to C, and notice how that one little tweak transforms your opportunities in the key of C and its relative, A minor.

And speaking of minor keys, why not try a minor open tuning? Drop the third a half step from your favorite major tuning to set a minor mood. Check out this live version of Sonny Landreth’s “Congo Square” below to hear how hip a simple blues progression can sound in open D minor.

There’s a good reason that 4/4 is also called common time - it’s everywhere. In these uncommon times, why not mix things up?

It doesn’t have to be fancy math rock. You can even stick to quarter notes. 5/4 is the same deal with an extra beat, and 6/4 adds two, which is simply another half of a bar. Try extending the rhythm of a straightforward chord progression by one beat for a few measures.

Then try adding another one and perhaps switching chords for those two beats to establish a more interesting context from which to launch your feelings. How about adding one more beat or one more chord? You get the gist.

See Chris Cornell and Kim Thayil’s Soundgarden songs for myriad ideas that flow as if they were in 4/4 but are actually in slightly odd, quarter-note-based time signatures, such as “My Wave” (verse riff in 5/4), “Fell on Black Days” (6/4) and “Outshined” (7/4). There’s no time like the present to shake things up and shine on through.