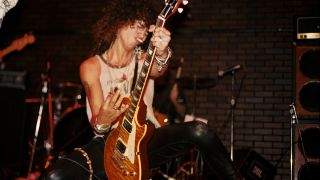 It isn’t easy to pare 50 years of rock and roll down to a top-10 list, but we’re feeling brave, so what the hell. Here are our picks for the 10 greatest rock solos ever committed to record.

Although the end of Layla may be more memorable to most folks, Allman’s Statesboro slide show verifies his title as the undisputed king of bottleneck guitar. Slick as oil but with the ability to stop on a dime, Allman not only redefined how slide guitar was played but also created a recycling market for empty Coricidin bottles.

While Axl whined, swayed and sashayed like Steve Wonder around his mic stand, wondering where to go next, Slash laid back with his Les Paul, patiently waiting his turn in the spotlight. Then, with his blistering ascent up the E harmonic minor scale - which kicks the second guitar solo of this tune into high gear - the mad top-hatter single-handedly breathed new life into wah-pedal sales.

Slowhand? Not on this track. Clapton pulls out every blues-rock cliché in his lick-tionary for this roadhouse romper. The true voodoo of this solo lies at the crossroads where major and minor pentatonic tonalities meet, mingle and blast off from E.C.’s fretboard. Ol’ Scratch surely smiled when he heard this one.

You almost wonder if Ozzy named this tune after hearing Rhoads’ white-knuckled rock and roll ride up and down the F# minor scale. What more could you want in a metal guitar solo? Tapping, rakes, bends, trills ascending legato runs... Rhoads set Eighties guitarists on the rails of neoclassical rock with this one. All aboard!

Whereas Jimmy Page discovered all that glitters isn’t gold on his well-intended but poorly executed “Heartbreaker” solo, his 24-karat licks in Stairway are nothing short of divine. His resolution to the natural F note in the opening minor-pentatonic lick of the solo couldn’t have been more perfect if the Almighty himself had chosen the note.

Sultan says, “Spend less time making your harem moan and more time making your guitar cry and sing!” For those of you who’ve learned the outro solo the lazy way -
playing eighth-note triplets for the daunting Dm, Bb and C arpeggios - get your fingers back to the wood shed. Those are 16th notes that the “Sultan of Strat” rips off.

The Holy Grail for all aspiring rock guitarists. Learn Eruption and you’ve earned some serious bragging rights. But if you really want props, you’ve got to tame the whole volcano, not just the tremolo picking and tapping sections.

2. The Jimi Hendrix Experience - All Along the Watchtower

Jimi offers plenty of reason to get excited in his Watchtower solo. Besides his masterful manipulation of the C# minor pentatonic scale, Hendrix’s wah-drenched octave climb and the double-stops in the latter half bear out his gift for melodic embellishment. It’s enough to make any cat growl.

With little bits of Jimi, Wes and Mayfield, and a whole lotta soul, SRV exhibits exceptional dynamic prowess throughout, making this reverent Hendrix cover his own. A seemingly lost art among modern-day guitarists, Vaughan’s R&B-style chord melody is like priceless art. It should be both admired and studied.