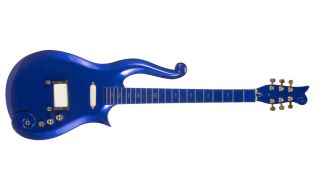 Sold at Julien's Music Icons auction in Beverly Hills - the same event that saw the world record-breaking $6 million sale of Kurt Cobain's "MTV Unplugged" Martin D-18E - the heavily-worn guitar met its high pre-auction valuation, which had it pegged at $400,000 - $600,000.

Prince used the guitar during his Purple Rain, Parade, Sign o’ the Times, Lovesexy and Diamonds and Pearls tours, and for the "Cream" and "Get Off" music videos.

It was also used during the superstar's appearances on Saturday Night Live’s 15th Anniversary Special in 1989, the 1991 MTV Video Music Awards and for his legendary set on the Arsenio Hall Show in 1991.

You can watch him use the guitar for the Arsenio Hall set in the video below.