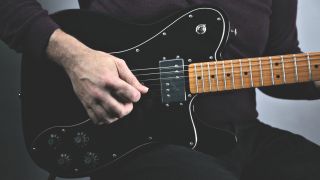 If open chord shapes strike you as bland and boring, take heart. In this quick lesson we’ll show you four ways to get more mileage out of them and make them sound more exotic than you might have thought possible.

You’ll probably identify the shapes in Figures 1A–E as a bunch of “campfire” chords - along with a trying-to-be-hip “five” chord (Figure 1B). But dance these chords up and down the neck a bit and you’ll give them new life.

Figure 2 puts a party hat on the familiar E major shape by placing it up in 13th position and pushing it through a bevy of intriguing new sounds before placing it safely at home in open position.

There are two cliche-busting rules in effect here.

First, any chord that can be played in open position can also be played 12 frets higher without changing the name of the chord. (It sure will change the sound, though!)

Second, don’t sweat the names. You can groove to the sound of Fmaj7#11/E and wait until later to figure out what it’s called.

“Five,” or power, chords typically get restricted into punk songs, most of which eschew ringing open strings.

Figure 3 however, places a halo over the head of this common shape by adding droning open strings and using it to play - surprise - a Christmas carol! We’ll leave it to you to figure out the exact tune. Once you do, complete the song (and keep it in mind for the holiday season).

When simple chord shapes turn mirthful, your picking hand can get its party on too. Figure 4 uses a simple rise-and-fall picking pattern, playable with a pick or with your fingers.

Yet, by applying this pattern to a C major shape at the 8th and 6th positions, notes scatter up and down with delightful unpredictability. Repeat it a few times, letting its mesmerizing nature sink in before you land on the simple yet sweet Cmaj9 chord.

For Figure 5, you’ll need to tune your low E string down to D. Use an electronic tuner to save time, or match the pitch of your bottom string’s 12th-fret harmonic to that of the open D string. Then take the two common chord shapes here - D and D minor - and use them to play another holiday favorite.