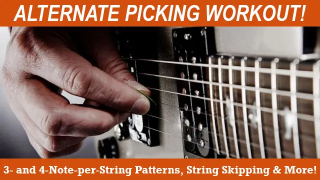 Alternate picking is as important to a guitarist as alternating strides are to a sprinter. Imagine a sprinter leading with his right leg twice in a row!

The following exercises should be practiced along with a metronome. Start slowly heavily scrutinizing your pick hand for consistency. Make sure you relax your wrist, elbow and shoulder. Tension in any of these joints will impede fluidity. Also, be sure to breath normally, as holding your breath may lead to an increased heart rate, which often causes musicians to rush.

In addition, practicing slowly will help you to synchronize your fret and pick hands. Many guitarists try to burn right away, but when learning new techniques, the wise musician will heed this saying: “The slower you go, the faster you’ll get there.”

Before we begin, consider your equipment, specifically the weight of your pick to the thickness of your strings. The higher your string gauge is, the heavier your pick should be. A light plectrum on heavy strings will make it difficult for your pick hand to keep up with your fret hand, as will a heavy pick on light strings.

But most important you should select a pick that sounds right for you. If they all sound the same, you aren’t listening hard enough. In general, the heavier the pick, the darker the tone. Also, sometimes picks can benefit from modification by, for instance, sanding down an edge to create a more cutting tone. In the end, all that matters is the sound.

Three and four notes per string

In FIGURE 1A , notice the position shift that occurs on the “and” of beat 4, allowing the fret hand to continue uninterrupted with the established three-notes-per-string pattern.

The picking patterns in FIGURES 2A-B , while identical to those of FIGURES 1A-B , feature more interesting melodic sequences.

Once you have learned FIGURES 1 and 2 , try coming up with some of your own melodic sequences in ascending and descending directions, using these picking patterns. With practice and time, you should discover countless variations.

FIGURES 3A-B are derived from four-notes-per-string patterns. When starting an ascending four-note pattern, use an upstroke; for descending patterns, of course, begin with a downstroke.

Initially, it may be helpful to accent the first note in each 16th-note grouping. This may feel awkward for a while, but stay with it and your picking technique will benefit immensely. Once you start gaining pick dexterity, strive for fluid motion of your fret hand, allowing it to slide horizontally along the neck. Also, try practicing FIGURES 3A-B with a thick ski glove on your fret hand. Seriously. This will place more emphasis on your plectrum and expose any faulty picking.

Now we’ll examine alternate picking within the familiar structure of the minor pentatonic scale (FIGURES 4 and 5 ).

When performing two-notes-per string patterns such as these, you can begin with either an upstroke or a downstroke, whether ascending or descending. Two-notes-per-string picking patterns are actually among the most challenging patterns to execute at fast tempos, simply because there is a shorter interval between string shifts (i.e. every other rote).

To aid in the execution of this pattern, imagine that your pick is moving over a flat plane (the fretboard) with as little vertical motion as possible. Also, experiment with different pick angles and pick-hand configurations. It would be nice if there were a universal picking paradigm, one all guitarists could follow, but that’s not the case. For example, Pat Metheny’s picking looks “incorrect,” but his picking is, of course, extremely accurate. In developing your own picking technique, listen to your body and your ax, and go with what works best for you.

Next, let’s do some string skipping. This is an important technique to master, as it can prevent you from sounding too scalar and predictable.

Although FIGURE 6 uses eighth-note triplets as its rhythmic currency, its phrasing occurs in groups of four. This is called rhythmic displacement, a concept that can help you apply odd-note groupings over even time signatures and vice versa.

Note that FIGURE 7 is ultimately a string-skipping variation of FIGURE 1A.

Practice FIGURES 6 and 7 until you don’t need to look at the guitar at all to perform them. Then try applying some string-skipping to the previous exercises. Start with two-string leaps and then move on to three-, four- and even five-string leaps.

Finally, we come to the most difficult aspect of alternate picking: asymmetrical groupings from string to string.

Here, with regard to starting strokes, it’s best to adhere to the tips given in FIGURES 1–5 –5. Picking every note in a difficult passage, such as the one in FIGURE 8 , gives each note an equal weight and attack.

There will be times, however, when it is more musical to use hammer-ons, pull-offs and slides in such a phrase (FIGURE 9 ).

The important thing to remember—with alternate picking or anything else—is that your technique should always support your music, not the other way around.