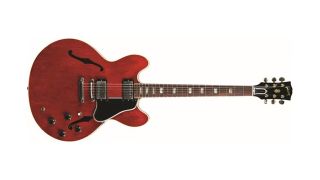 There are lots of "Guitars of the stars" coffee table books out there, including many containing photos of iconic instruments owned at one time by Eric Clapton.

Six-String Stories [Genesis Publications] is unique, however, as the guitarist’s reminiscences fill the book’s 376 pages, alongside extensive specs and other background information on nearly 300 instruments. Here are a few excerpts.

“I think the cherry Gibson ES-335 was really acceptable on every front. It was a rock guitar, a blues guitar – the real thing. Even in those days I may have had reservations about Fenders, in that they were solid, whereas this one was semi-acoustic. What I love about Fenders now I would probably have held in a little bit of contempt in those days, in that they didn’t have any purfling down the side of the neck, and so on. This guitar had all the finish you would ever want and all the credibility a guitar needed at that time. The fact that Alexis Korner and I played those Kays was because you couldn’t get these Gibsons in England – you didn’t see them. You got copies, German guitars like Hagstroms, Hofner. I bought this brand new either from Denmark Street or Charing Cross Road.

“The ES-335 is beautiful, and I loved it. It was played regularly over the years. It got on albums, it never really changed. It never got old, it never wore down. It never lost anything. I’d play it now. Anything that’s been that long in my life and is still functional – there aren’t too many things that can command that kind of respect. I’ve had no cars that long for instance. There are no other tools in my life that have been as long-serving.”

“With Delaney and Bonnie I used my old Stratocaster, Brownie, which was really, really good – a great sound. It was just right for the kind of music I was playing with them.

“I think Brownie dictated the way I played to a certain extent. Because the Strat has less sustain – it’s harder to bend on and harder to hold the bends and apply vibrato – I play more notes. I didn’t look at the change from Gibson to Fender as ‘I’m done with that.’ It was more a case of wanting to try something else.”

“I finally got to meet Tony Zemaitis in the mid ’60s. I asked him to make a 12-string for me, bigger than he’d ever done before and inlaid with silver. I wanted it to be incredibly ornate. I wanted to explore everything we could. The heart shape and the four-leaf clover on the headstock were my ideas. So he made this guitar, it probably took about a year, and it was massive. It’s reputed to be the biggest 12-string in the world. It’s about the same dimensions as a mariachi bass. Tony really did a beautiful job. I used it with Blind Faith and I did some other material with it.

“I was involved in a very, very stormy relationship at the time. During one of our big rows, I took the guitar and I demolished it. I took it by the neck and I banged it against the wall until there was nothing left. Then about five years later – I still had the neck – I took it back to Tony and said, ‘I’ve got to tell you a terrible story, forgive me, I can’t bear to be without it,’ and I apologized and made all the excuses I could think of. He was shocked, but he understood, so he built another body onto the neck. So this is Mark 2 – the first one was destroyed, but the neck is original.”

“I don’t play the electric guitar much at home. In the ’80s, I usually played these acoustics that I got from the Santa Cruz Guitar Company because they had a nice sound.”

“I used this guitar primarily for writing.”