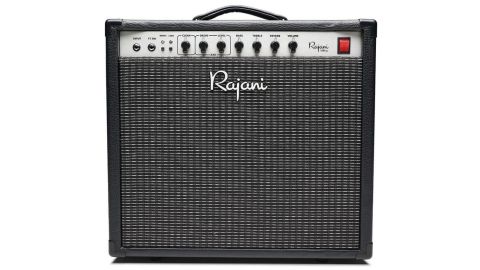 The VOD-50 is a great-sounding amp by any measure, and an impressive new take on the post-tubes world of tone generation.

The hybrid amp, a concoction marrying tubes and solid-state amplification, has been around for a while. Makers like Music Man and Peavey mixed solid-state preamps with tube-powered output stages way back in the ’70s to create amps intended to serve as professional-grade rigs.

A couple of decades later, Marshall, Vox and others went the other way, melding a preamp tube or two in the front end with solid-state output stages. As the tech needed to populate a tube-driven front end is less expensive, lighter and runs cooler than what’s required for a tube-powered output stage, this proved to be an affordable way of giving a modicum of tube tone to the student-and-novice buying sector.

Solid-state technology has come a long way in the years since then, and the U.K.’s Rajani Audio Electronics has tapped the available topologies to come up with a fresh approach to the hybrid guitar-amp format. The new VOD-50 (for Valve OverDrive) is a 1x12 combo designed by founder Ravi Rajani and made to run with the boutique crowd.

The amp, which is also available as a head, uses one 12AX7 and one 12AU7 in its preamp stage to generate clean and overdriven tones from its two foot-switchable channels. It’s partnered with a 50-watt linear Class AB solid-state power amplifier.

Guitar-tone mavens will argue incessantly over whether the sweetest sonic juice is generated by the preamp tubes or the output tubes, and of course both approaches are entirely correct — or can be, depending on what sound and feel you’re after. But anytime you hear an amp that delivers scorching rock lead sounds at semi-reasonable volume levels thanks to an effective master-volume control, that’s largely happening courtesy of preamp-tube distortion, so it does make sense that you can deliver these sounds effectively through a linear solid-state back end coupled to the right tube front end. Such is Rajani’s approach.

The VOD-50’s Clean channel has a single control labeled, appropriately, “clean,” which Rajani describes as a “wide-band” mid-boost control “that adds volume and grit.” The Lead channel has drive and level controls, and both channels share bass, treble, reverb and a master volume that governs the final output from both channels.

The Boost mode works on both channels, and the included two-button foot switch delivers boost and channel switching. The light weight of the solid-state output stage and the use of a 12-inch neodymium Jensen Jet speaker in a solid pine cabinet measuring 20.75 x 18.5 x 10 inches allow the VOD-50 to tip the scales at a hair under 30 pounds.

Tested with a Les Paul and a Telecaster, the VOD-50 delivered respectable blackface-like clean tones, with a little more grind and sting for blues or rock and roll rhythm once the boost was engaged. This channel is adept at jazz or more vintage-leaning blues, and makes a good foundation for basic pop-rock clean tones. It also takes boost and overdrive pedals very well.

For me, the amp really shines in the overdrive department. Kick in the Lead channel and the character shifts toward classic-meets-contemporary Brit-rock tones, with a chewy harmonic content, great dynamics and impressive clarity amid the gained-up sizzle.

The drive control offers a broad range of gain levels, from mild crunch to all-out cascading-gain-like fury, though you’ll find no mega-chug metal or über-shred lurks here. While the Boost mode is less notable on top of this, it still induces a degree of added sting when you kick it in, providing a handy lead lift. Throughout the gain settings, there’s great touch sensitivity to the playing attack, and the amp cleans up impressively with a light pick attack, or by rolling off the guitar’s volume control, at all but the maxed-out drive level (which sounds fantastic in and of itself).

The two-knob EQ is surprisingly versatile, and the controls combine to elicit a wide range of voicings, from thick to bright to scooped to mid-pushed. The master volume works very well and allows cranked-up tones at bedroom volumes, but the VOD-50 sounds its best with the master up to at least a third of its range, or beyond, as do most amps.

The spring reverb sounds good, and the effects loop has a useful line/instrument switch that adds 25db of gain to the effects return in the instrument position. With the switch in the line position, the send functions as a line out, while the instrument setting drops the output by 25db to play nicely with stomp boxes.

Overall there’s easily enough output here to compete unmic'd with a loud drummer. Where some other players may justifiably complain of the “coldness” or “hardness” of solid-state guitar amps, I found nothing in the VOD-50 but great touch sensitivity and a truly inspiring playing feel, and I must say that I really enjoyed the experience.

Even so, to refresh my memory of what great all-tube rock tone sounds and feels like, I fired up my Friedman Small Box 50-watt head (a benchmark for the contemporary interpretation of classic British-rock guitar tones) and A/B’d it with the VOD-50, first through the 1x12 Rajani combo cab, and then with both amps through a 2x12 Celestion-loaded extension cab. The VOD-50 acquitted itself so well that I found it difficult to objectively voice a preference for the lead tone of either after a solid hour of playing between them.

The combo’s Jensen Jet speaker sounds very good, and the use of a neodymium unit to lighten the load is admirable, but I’d be curious to hear the Rajani with a more British-voiced speaker, and with a little more sparkle and chime available to the rhythm channel.