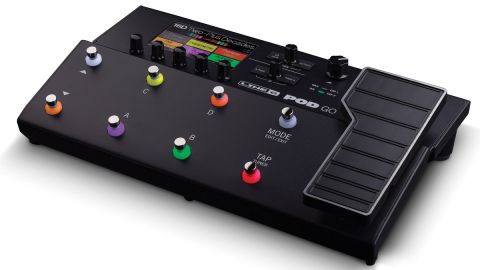 The POD Go builds on Line 6's reputation for high-quality amp modeling and multi-effects units that have serious power and yet are simple to operate, portable and great value for money.

When it arrived on the scene two decades ago, Line 6’s kidney bean-shaped POD heralded the age of modeling. There are players, like Nashville’s resident guitar genius Jack Pearson, who still swear by those original sounds.

I too remain unembarrassed by tones I achieved with the OG on a record two decades ago. But Line 6 hasn’t stood still. The company has upped its modeling game with HX technology and now includes it in the new POD Go multi-effects processor.

POD Go is for players who want the HX sound quality of the Helix LT in a simpler, lighter, less expensive modeling solution. All the Line 6 essentials are here: a color LCD display interface, amps and effects arranged visually as blocks, footswitches color-coded to the type of effect, and Snapshots that let you seamlessly switch between tones without audio dropout.

Some sacrifices to size and price must be made. With half the processing power of the LT, the Go has only four fully assignable blocks (out of 10), just one effects chain and less looping time, among other things.

But POD Go still has more features than we have room to go into here, so let’s devote the space to describing experience and reaction. Sound is paramount, and while the the original POD performed well, the HX processing adds extra levels of realism in both tone and feel.

I began by using the unit as a pedalboard in front of a Fender Blues Junior. I came from the amp out, disabled the speaker emulation and was ready to go. You can either eliminate the speaker on a patch-by-patch basis or globally in the Global settings. In addition to a couple of overdrive blocks, I set up a U.S. Small Tweed amp sans cabinet and linked it to a foot switch to act like a second, grittier channel for the super-clean Junior.

POD Go’s GUI is so intuitive that all this programming was achieved without cracking the manual. The only stumbling block I encountered was when the tap tempo for delay wasn’t working. The manual explained this was because the feature is available in BPM subdivision mode, and not in the Millisecond mode I had selected. POD Go will also record directly into a DAW through a USB connection.

I plugged it into Ableton Live, which recognized it immediately. With the CPU set to 128, I experienced virtually no latency, even while monitoring it through the DAW. If you need to set your CPU higher, you can monitor your sound directly from the unit through headphones, an amp or powered speakers.

Re-engaging the POD Go speaker cabinet models for direct recording (you can also load your own IRs), I found the high-end trails evidenced a little digital crispness when used with a distorted amp setting or distortion pedals. Fortunately, the cabinet blocks have a High Cut option. Lowering the frequency from the default of 8 kHz to a typical speaker’s max of 5 kHz removed any hint of unpleasant fizz.

Listening to my recorded results even without post processing, I doubt anyone could tell the sounds were modeled. For me, the bottom line with digital emulation is how quickly I forget I’m playing through virtual amps and pedals. Once I had POD Go set to my taste, I forgot I was playing through a modeler and began to enjoy the inspiring tones at my disposal.

Whether for recording or live use. POD Go offers a package of pro-grade modeled sounds in an affordable, bulletproof, easy-to-use platform. If you don’t need dual signal chain, MIDI I/O, Variax control and the like, and want something compact for small stages and/or fly dates, check out POD Go.