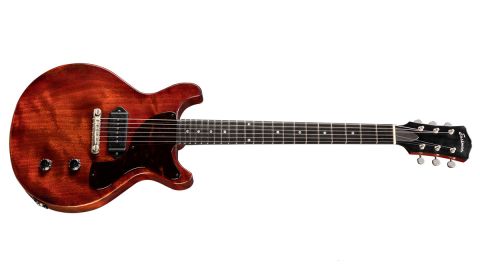 An appealing homage to the late-’50s Junior, with quality components, good playability, and a lusciously long-loved look and feel.

Last year, Eastman introduced original in-house designs, like the semi-acoustic Romeo, to its lineup, which includes near-replicas of classic electric guitars. Now the company has gone back to basics with an appealing new entrant in the guise of the fabled LP Junior: the SB55DC/v, which we’re checking out as a GP exclusive.

When done right, there’s little not to like about an iconic set-neck, double-cutaway, single-pickup slab of rock-and-roll fury fitted out in this classic guise. Eastman wisely sticks to the program in that regard. Consultation with vintage-guitar authorities during the design phase helped the company get many essential little details right, as well as identify thoughtful upgrades that further enhance the guitar’s value. With its long-loved look and gently played-in feel, this is a guitar you want to wrap your hands around right out of its brown faux-suede hardshell case.

The body lines accurately follow those of the 1958–’61 double-cutaway Jr. in a 1 7/8–inch thick slab of a mahogany-like wood called okoume, a timber that originates primarily in Gabon, in Central Africa, and which is available in plentiful supply and lighter weights than traditional Honduran or African mahogany.

The SB55DC/v is finished in a hand-rubbed antique varnish over a faded nitrocellulose lacquer color coat (an aged cherry fading toward rich brown), a process borrowed from Eastman’s violin division that lends the instrument a tactile feel. The result is an extremely thin and somewhat open-pore finish, yet one that is still very smooth and glossy. It’s complemented by a tortoise pickguard, pearl dot inlays and pearl logo.

The glued-in neck is also made from okoume, topped with an unbound ebony fingerboard with 22 medium-jumbo frets, leading to a bone nut and 17-degree back-angled headstock. Eastman’s manufacturing process essentially involves a collective of individual builders rather than an assembly-line setup, and the personality of that approach comes through here.

Although bodies are CNC machined, each neck is hand carved and sanded, and while there’s a general “shape” they are aiming at across the model, all will be slightly different as a result. I really dig this one, as it happens, which is a full, rounded profile that’s very similar to several examples of the real thing that I’ve had in my hands in the past. At a hair over nine-tenths of an inch at the first fret and one inch at the 12th, it’s prominent in the center of the back but falls away at the shoulders to avoid getting in your way. Nicely rolled fingerboard edges add playing comfort.

Although the bridge may look at a glance like a lightning-bolt wrap-tail, it’s a compensated aluminum wraparound by Faber, with locking steel studs. The tuners are vintage-Kluson-style Fabers as well. The single pickup isa’50s-wind Lollar P-90, which sits right around the middle of the vintage spectrum at a DC resistance of 7.89k ohms. It’s wired through a single volume and tone control, the latter being a CTS no-load tone pot, which takes itself entirely out of the circuit when fully clockwise.

Fans of the breed often talk about the increased resonance of single-bridge-pickup guitars like the Junior, attributable to both the solid, unrouted wood at the neck joint and the lack of magnetic drag on the strings in that position, and the SB55DC/v scores big in this department. The thing rings like a gong when played unplugged, with a loud, lively acoustic character and plenty of vibration throughout the body.

Tested through a Dr. Z Carmen Ghia and 1x12 cab, and a Friedman Small Box and 2x12 cab, the guitar revealed a core personality that’s surprisingly bright, clear and articulate. Where some P-90-loaded guitars of this style are inherently gnarly, the lower-medium-output Lollar in this Eastman is predisposed toward helping jangly arpeggios ring out and making low-string twang riffs bite and sting.

With the tone knob rolled down about 40 percent, there are even some smooth, near-jazz moods to be had. With everything up full, though, I find the no-load tone pot might even be unnecessary, as bright as this pickup is, although other players may find it useful.

With either amp set to the edge of breakup, the SB55DC/v was still surprisingly crystalline in its performance, a response that certainly lends itself to useful dynamics and a versatile range. Some players might miss the grit, grind and characterful granularity you get from many P-90s at these settings, but apply some overdrive and it transforms into a snarling, spitting rock beast that still exhibits good cutting power, thanks to the way individual notes remain distinct within the melee.

All in all, the SB55DC/v ably reminds us why original Juniors became such punk-rock and garage-rock classics, yet it won’t slip back into its case without insisting there’s a lot more versatility here, too. Ultimately, it’s an extremely appealing guitar, and an homage done right.