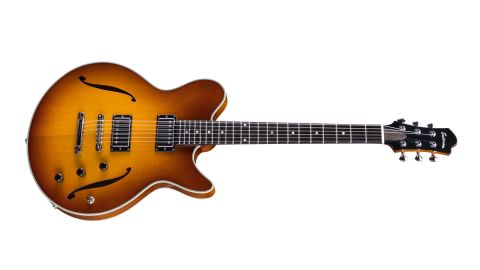 Having earned a boatload of praise since the 1990s for its relatively affordable, yet high-quality acoustic stringed instruments, Eastman saw its reputation in the electric guitar world go from strength to strength in the 2010s.

The majority of its models have been homages to and near-replicas of classics from the golden age of American-made electrics, such as Eastman’s take on the Les Paul or the ES-335. However, the new Romeo is very much an original concept, and one that aims to punch above its weight class.

Designed by Los Angeles–based master luthier Otto D’Ambrosio, the Romeo is a thinline archtop semi-acoustic guitar that appears primed to take you from jazz to blues to rock, all in one sitting, while delivering a big dollop of its own personality along the way.

Based on a cursory glance, you might sum up the Romeo as a downsized ES-335 with asymmetrical dual cutaways, but its construction is actually very different than that seminal semi. The 1.75-inch-deep body is made with a solid arched-spruce top like that used on fine archtop and flat-top acoustics alike, and paired with back and sides of laminated mahogany.

Inside, there’s no full-length center block like you would find within a traditional semi-acoustic. Instead, a smaller block of lightweight mahogany underneath the region of the stud-mounted stop-bar tailpiece and Tune-o-matic bridge (both by Gotoh) serves as the anchor for those chunks of hardware, while providing feedback resistance for the top.

The end result is an extremely light guitar that exhibits a lot of acoustic resonance. Played unplugged, it has a bright, lively response that almost approximates an attenuated flat-top, and it exhibits some appealing compression from all that vibrational action when you hit it hard. Eastman offers the Romeo only in a Gold Burst finish, but it’s a tasty one — sort of an iced-tea burst with a nicely muted coloration. It’s beautifully framed by six-ply binding on the body’s top and three-ply on its back.

The glued-in neck is made from solid mahogany and carved in Eastman’s “traditional even C” profile, which has a depth somewhere between what we commonly consider a ’59 and a ’60 shape. The unbound fingerboard is made from ebony (which is nicely echoed in the ebony control knobs) and fretted with medium-jumbo Jescar wire that has been faultlessly dressed.

Combined with a confident setup, the result is a swift and easy playing experience, all the way from bone nut to the neck/body joint, where the sculpted heel and deep lower cutaway make for easy access to everything short of the final fret or two. D’Ambrosio has selected Lollar Custom Wound Imperial humbuckers for this model, which should prime it for anything from the PAF-loaded tone of Gibson’s great late-’50s archtop-electrics to more blues- and rock-inflected bite and sting. They’re wired through a master volume control, individual tone controls and a three-way selector switch.

I tested the Romeo through a 15-watt Divided by 13 JRT 9/15 head with 1x12 cab and a 50-watt Friedman Small Box head and 2x12 cab, a pair of amps that ably drew out this guitar’s chameleon-like character. It was hard to resist tackling some cranked-up rock and roll, and the Romeo excelled at classic-rock riffing, garage-rock power-chord chunk and punk-edged indie rock. Get some gain and decibels working for you, and the semihollow body comes alive.

Feedback howl is far less of an issue than this construction format might imply, and I experienced serious squeal only if I got silly with my positioning in front of the speaker cab. Otherwise, there’s evocative, hovering feedback aplenty — a great sustain booster! — with impressive note clarity even amid moderate overdrive. With the guitar dialed down to the edge of breakup, the contribution of the Romeo’s solid spruce top becomes even more apparent, adding its characteristically sweet and complex high end to a performance that’s otherwise in the ES-335 ballpark, yet something all its own.

The Romeo reveals even more of its unique sonic personality with the gain tamed down for jazz tones on the neck pickup and jangly chordal arpeggios on the bridge and both-pickups settings. It extends from silky articulation in the highs to warm, rich lows, with a relatively balanced and unobtrusive midrange in between, for an overall voice that’s both musical and versatile.

All in all, the Romeo represents an impressively original design effort rendered with quality construction and excellent fit and finish, at a relatively reasonable price. It all adds up to a guitar with lots of personality and surprising versatility. As such, this new original Eastman model earns itself an Editors’ Pick Award.