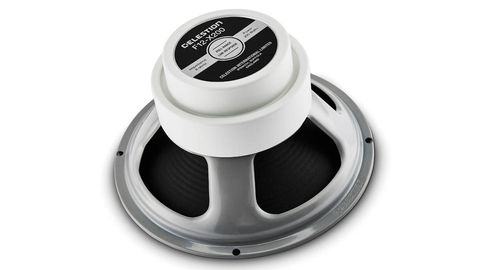 A smart move from Celestion, the F12-X200 joins the likes of Kemper's Kone in offering devotees of the digital modeling and profiling amplifiers a speaker option that's designed specifically for their needs.

Ever since vastly improved amp-modeling units started proving themselves able to cut it onstage with big and small acts alike, guitarists have been searching for the best ways of making those digital simulations that sound so dynamic and accurate in recorded tracks feel something like traditional amps in the live environment.

Sure, they deliver superb tone - and an infinite variety thereof - through studio monitors or front-of-house (FOH) P.A. and onstage monitors, but where’s that thumping, breathing, cab-in-the-room grunt that we’ve come to know and love from traditional amp-and-cab rigs?

Many modeler players have also employed full-range flat-response (FRFR) backline speakers to reproduce the broad frequency range that one of the many popular digital alternatives dishes out, but some find those hi-fi-like rigs cold and sterile in person.

Others disable their units’ cab sims and run into traditional guitar cabs, but that sidelines a big part of the sonic flexibility that modelers offer in the first place. Celestion’s answer to this dilemma is the F12-X200, a 200-watt 12-inch speaker that the British company refers to as “full-range, live-response” (FRLR).

The F12-X200 incorporates a traditional ribbed-paper speaker cone with a high-frequency compression driver mounted within its two-inch voice coil and fed by a passive crossover.

The unit, which weighs 9.1 pounds and is currently available at eight ohms only, is made to be mounted inside almost any traditional guitar speaker cabinet or monitor wedge, or within a ported cab, for which Celestion provides a blueprint for DIY-ers and custom cab makers.

When powered by your own external power amp and fed by an amp-modeling unit, the F12-X200 is intended to remain neutral and reproduce the full range of frequencies that modelers deliver, while offering the physical feedback and familiar in-the-room experience that players expect from a traditional guitar cab, thereby providing the crucial “feel” part of the equation that some find lacking in FRFR rigs.

I mounted the F12-X200 into three very differently constructed test cabinets and hit it with a Fractal Axe-Fx III into a Fryette Power Station used as a power amp, eliciting extremely satisfying results in all cases. They each sounded somewhat different, as is the nature of such things, but with a little tweaking all produced sounds and playing experiences I’d be happy using onstage.

The first of the three was an Egnater Tweaker cab, a compact, affordable, partially open-back 1x12 cab made from birch ply, the inside bottom and sides of which I lined with acoustic foam to dampen excessive reflections.

The result was a mostly well-balanced delivery that perhaps favored clean and mid-crunch settings from the Fractal, but still delivered adequate thump and grind to heavier presets, all with good dispersion in the room. I found the highs just a tad piercing in this cab on some settings.

By affixing a homemade deflector - a four-inch-diameter disc of one-and-a-half-inch-thick acoustic foam - to the inside of the grille cloth directly in front of the voice coil and tweeter, I was able to soak up much of that spikiness and render a much more pleasant overall sound.

Next, I popped the F12-X200 into a Suhr Badger, a compact, yet relatively deep, closed-back 1x12 cab made from birch ply, with dual bass ports in front. The Badger is purportedly tuned for use with Vintage 30–style speakers.

The difference here was heard immediately in a more authoritative low-end thump and muscular midrange punch that really gave weight to Crunch and Lead presets through my favorite 4x12 IRs (Impulse Responses) in the Fractal.

This option was perhaps a touch less open and airy when hit with some of the cleaner amp presets, and those using open-back 1x12 and 2x12 IRs in particular, but still very satisfying, and this was probably the best-sounding cab I tested overall.

Funnily enough, transferring the foam-disc over to the reverse side of this cab’s grille cloth also tamed and sweetened the highs, dialing it in closer to my tastes.

Experimenting further, I blocked one of the two bass ports, which also helped tone down the slightly boomy quality of some stack-like presets - another matter of personal taste.

Finally, I mounted the speaker in a basic 14-by-14-by-11-inch pine box with a fully closed back, no port, and plenty of acoustic foam wedged in against the back and sides of the inside to dampen reflections. And you know, even that sounded pretty darn good.

If the results of any of the above were still not exactly like playing a traditional amp through a traditional cab, well, most guitarists are getting used to that reality by now. And even so, the sound was beyond good enough. If anything, after some quick A/B referencing against a couple of good “real amps and cabs,” I kind of missed the detail and clarity of the modeling rig into the F12-X200.

It’s worth noting that this FRLR speaker’s efficiency rating, at 96 dB, is lower than most of Celestion’s own contemporary guitar speakers, meaning you’ll need to hit it with a little more power to generate the same volume you’d get from a 100 dB Alnico Blue or Vintage 30, for example, but most suitable power amps should allow for that easily enough.

Even so, and with the Power Station’s modest 60-watt output rating, I was able to generate far more volume than I’ve been able to use live onstage or in rehearsals for many moons, so it’s hard to imagine this will cause any problems.

All in all, the F12-X200 is a clever new product that admirably fills a gap in the market, and which will likely be heard on plenty of stages nationwide as the modeling boom continues.