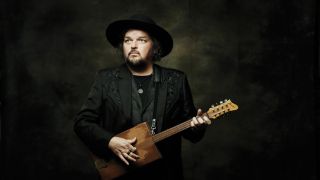 Once in a while, a recording enters the ears and strikes deep through the heart as natural, acoustic instruments channel profound life experience into musical art. Alain Johannes’ new album, Hum (Ipecac), has such an effect.

Though Johannes may not have an instantly recognizable name, many readers will be familiar with him from his performance and production work with Soundgarden’s Chris Cornell, Eagles of Death Metal, Queens of the Stone Age, Them Crooked Vultures, numerous film soundtracks and Eleven, the influential band he co-piloted with his wife, Natasha Shneider, who succumbed to cancer in 2008.

Their contribution to Cornell’s 1999 solo debut, Euphoria Morning, cannot be overstated, and fans of that record will readily recognize Johannes’ musical and vocal sensibilities upon hearing Hum.

He summoned Cornell and Shneider’s spirits for the haunting opening track, “Mermaid’s Scream.” “I kept hearing two voices in my head, which were Chris and Natasha,” Johannes says. “The reverse arpeggios I play represent the image of waves coming and crashing as I pictured a lighthouse scene.”

A multi-instrumentalist, Johannes may not be known primarily as an acoustic guitar maestro, but his skills are considerable.

He demonstrates deft DADGAD fingerpicking on the transcendental title track as well as on the standout, “Hallowed Bones,” played in galloping 12/8 time. “I imagined people dancing around a fire and on the edge of the forest,” he explains.

He also has a vast knowledge of acoustic instruments, and brings a bevy to the table, including a Portuguese guitar, a tri-cone resonator and a cigar-box guitar.

To create atmospheric textures, the inventive Johannes uses techniques such as playing a modally tuned banjo with a bow, and a fretless electric guitar with an EBow.

Considering how fantastic the album sounds, it’s amazing that Johannes self-produced Hum with his own gear in a small room at his sister’s house over 12 days in February while recovering from a severe months-long sickness.

He’s not sure if it was Covid-19, but the symptoms were similar. Johannes wrote, tracked and mixed a song per day in the order they appear on the record (with one day off), facilitating an astonishingly natural flow as his muse led him from one idea to another.

A native of Santiago, Chile, now living in the Los Angeles area, Johannes was on his way to play a Euphoria Morning tribute concert at Lollapalooza Chile when the pandemic hit. He was still holed up in Santiago when our Frets interview took place.

Endlessly interesting, and filled with an indomitable spirit, Johannes was excited to explain how he turned his sadness from the loss of Cornell, his parents and his uncle, who was a mentor, into a profound acoustic-based recording.

How do you approach creating a new record in the studio?

I never have a plan; I only have a need. I don’t write until I start recording, so I’ll only have vague ideas. The only things I have ready come from little jams that I post on Instagram. I earmark my favorites and keep them in a folder on my iPhone as potential song ideas. This time I felt that one in particular could be a great beginning of a first song on an album.

I played it on the Portuguese guitar, and the sequence appears exactly the same on “Mermaid’s Scream” because those chords with that melody have a specific feeling. I heard horns in my head, but my lungs had not recovered to the point where I had the power to play them. I realized this was going to be an acoustic recording with occasional touches of this and that.

The other idea I had earmarked from an Instagram jam was a part I played on a Republic tri-cone resonator. That wound up being the basis of “Hum,” and I knew it would feel great coming right after “Mermaid’s Scream.” So I tracked that and wrote lyrics to the melody I heard in my head.

Once I had that arrangement worked out and recorded, there was only empty space to fill, and I wound up in a routine. I would wake up and listen to the song from the night before, start working on a new idea, track from noon to dinner, mix after dinner, and then go to bed.

So after the first two, every song was written on the morning it was recorded. It almost felt as if the whole record was already in my imagination, and all I had to do was draw it out.

Can you share some details on the guitar and techniques you used for the opener, “Mermaid’s Scream”?

I took a trip to Portugal to produce an amazing instrumental band called Dead Combo, and while I was in Lisbon I fell in love with the music of Carlos Paredes, who I perceive to be like the Portuguese Django [Reinhardt].

Inspired, I got a Portuguese guitar about a year and a half ago, and I play it on “Mermaid’s Scream.” It’s a small 12-string acoustic with an oval shape and weird tuners, and I used the Coimbra tuning, which is [low to high] C G A D G A.

It was difficult to get used to at first, so I tried a version of DADGAD, as well as B standard, but there’s something about the voicings you can achieve with the original tuning because it breaks down into two sections. You can do chordal stuff on the bottom and have unique melodies accessible above because of the major-second intervallic relationship between the top two strings.

The phrasing I apply to the middle section to yield a mournful yet beautiful feeling is very much inspired by Paredes, but I wasn’t comfortable using only the thumb and index finger to pluck the way he did.

I used a full flamenco-style approach in my attempt to achieve the sound of a mythical mermaid screaming. I love the tone of the Portuguese guitar, because it has a certain brightness, but also a thickness in the middle range that’s perfect for the song.

You mentioned using a Republic resonator to record “Hum,” but what about the very old and beautiful guitar you play in the video for the song?

I found that guitar here in Santiago, and I could tell by the art deco design that it was from around 1910 to 1920. It required significant restoration of the bridge and some new inlays, and now it’s gorgeous.

It doesn’t weigh anything at all, and it has a beautiful sound, but not quite the powerful, low-midrange attack and darkness that I can get from the Republic tri-cone that I love using so much.

The Republic is especially amazing for being inexpensive. I customized a set of very thick strings with gauges ranging from .014 to .060 to accommodate lowered tunings.

“Hum” is in DADGAD, with a capo at the fourth fret. I use classical fingerpicking on the resonator in various patterns, and there’s a lot more happening than meets the eye. There are some intervallic stretches that would be impossible in standard tuning that I can do in DADGAD, but they are still difficult.

The nature of DADGAD tuning facilitates having a drone throughout as the harmonic tension shifts around it in ways that sound mysteriously beautiful. Nick Drake and Bert Jansch inspired me to explore open, expansive-sounding tunings. I’m also a huge fan of Indian classical music and anything that has a tonal center ringing out.

The concept of “Hum” is an imperceptible sound that all living things make. It’s like an electrical hum in nature that you can sort of hear, but it’s more of an intuition. I used an EBow on a fretless electric guitar to achieve the droning sound as well as some of the background melodies.

What capo do you prefer?

I love the Thalia capo, because it’s the only one I trust enough not to require retuning the guitar when I put the capo on and take it off. You need to have everything adjusted just right, but that’s what’s cool about the Thalia.

It comes with a bunch of different rubber attachments designed specifically to fit various neck profiles. It’s kind of funny to carry around this little felt bag with all the attachments, but I just throw it in my cigar-guitar box case.

What kind of cigar-box guitar does an aficionado choose to play?

I’ve been using Matty Baratto’s cigar-box guitars since the late ’90s or early 2000s. My first was a four-string model that sounded almost like a ukulele. My favorite was an eight-string version with four coupled strings, the lower pair in octaves.

The tuning is [low to high] C F Bb Eb. I took the eight-string on tour in 2009 and 2010 with Them Crooked Vultures. It was perfect for jamming with John Paul Jones playing mandolin on the tour bus, and I used it to write Spark [2010]. But a little over a year ago I took a clumsy fall backstage and damaged it.

It has since been repaired but is a little delicate now, so I’m not going to take it on the road. Matty made another one for me. I love the cigar-box guitar’s versatility. It can sound Arabic, flamenco or Appalachian. “Free,” from the new record, is a good example of the new eight-string’s tone.

What are your main instruments for an acoustic tour?

I bring the new cigar-box guitar, which has a Fishman pickup and preamp system. I have a new acoustic that I used on Hum that was made for me by Marco Bortolozzo in Milan, Italy.

It’s a parlor-size guitar made in the Torres classical style. I’ve never held such a dynamic instrument. It’s light, responsive and almost a third louder than the loudest acoustic guitar I’ve ever heard. He put a simple pickup in it. I like to have a 12-string acoustic in DADDAD tuning as well, so I can do “Make God Jealous” [from Spark] and a couple of other tunes.

I use a ToneDexter [by Audio Sprockets] preamp loaded with some of my favorite microphone tone models. I like to send one signal to the house and another through a couple of Dr. No ambience pedals, maybe a delay and a reverb, and into a small tube combo.

I hope you can get on the road soon and play this gorgeous record for people.

I needed to make Hum to provide some life force moving forward. When you are so sick that you can barely breathe, there are a lot of scary moments, especially in the middle of the night. It’s an awful feeling. I also needed to make this record to communicate certain things and almost give them closure.