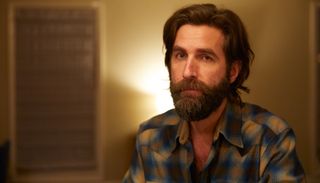 Tyler Ramsey made his name adding dazzling textures and colors to the music of indie stalwarts Band of Horses as their lead guitarist for almost a decade, but the Asheville, North Carolina-based musician is also a uniquely gifted singer/songwriter in his own right.

Ramsey is also the kind of guitarist who intuitively knows how to serve a song best with his playing, and he demonstrates that hard-to-come-by skill beautifully on his new single, a brilliantly unique acoustic take on the Pretenders’ “Back On The Chain Gang."

Ramsey was kind enough to give GP an exclusive premiere of the track, which can be found on Ramsey's new five-covers-and-a-remade-original EP, Found A Picture Of You.

You can check it out below.

“I love Chrissie Hynde and the Pretenders - I grew up hearing that unique voice on the radio and got hooked on their records," Ramsey told us about the song.

"This song has a line in it that gets me every time: 'I found a picture of you/those were the happiest days of my life/like a break in the battle was your part/in the wretched life of a lonely heart.' I was lucky enough to meet Annie Williams at Bill Reynolds’ studio in Nashville, and she sang the gorgeous harmonies on this.”

Set for an October 16 release via Fantasy, Found A Picture Of You also includes covers of Jules Shear’s “All Through the Night,” the Innocence Mission’s “Tomorrow on the Runway,” Elizabeth Cotten's “Shake Sugaree,” Jennie Lowe Stearns' “When You Go” and a reworked version of Ramsey's own “1000 Black Birds,” which first appeared on his 2011 album, The Valley Wind.

“The original idea behind this six-song EP was to try and record some of the cover songs that I’ve been performing at my shows over the years," Ramsey said. "I wanted to do it in a really simple way to document performances rather than overthinking everything in the studio setting.

"Each song features friends of mine playing or singing harmonies, and the idea was always the same: to try and get the feel of what happens on tour when a friend gets up to sing harmonies or play guitar or fiddle. There is such amazing energy that happens in those moments when songs are played and sung maybe for the first time together in front of an audience.

"When the list of songs came together I realized that most of the writers and all of the voices of the songs I was covering were women. A lot of my favorite songwriters are female writers, and a lot of the records in my collection that have really had an impact on my musical path have been female artists.”

To preorder Found A Picture Of You, step right this way.