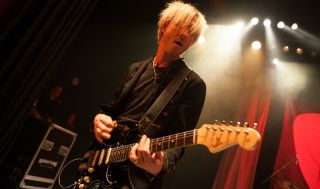 Kenny Wayne Shepherd has been busy of late talking up his stunning new signature Stratocaster.

The new Strat was certainly not far from his mind during a recent interview with Total Guitar. However, Shepherd also took time during the interview to discuss his amps at length, revealing that the Fender cabinets you see him use onstage are actually, under the hood, modified Dumbles.

“You’ll see all Fender amps on the stage, but they are what we call in the hot-rod community - because I am a big car guy - they are like sleepers, which is basically if you pull up next to a car and maybe your grandmother might be driving it but it has 800hp under the hood,” Shepherd said.

“What I have done over the years is I have been working with Alexander Dumble, and he has been building me a variety of amplifiers, and every one of them serves a different purpose and has its own unique sound. He basically uses the cabinet and the chassis and everything from that point forward is proprietary to him.

"He completely hand-wires his own circuit, his own design. He is building his own amplifier from scratch on the inside. It is remarkable, the sounds he has been providing me with.

“That’s the one thing that’s worth the investment in tone," Shepherd continued. "I know there is a lot of hype around Dumble and his stuff, but most of the time when there is that kind of hype, it's there for a reason. It's the biggest investment in my sound that I have made in the last decade."

"He has got these amplifiers built to specifically respond to the way that I play, so they effortlessly do the things that I am intending them to do. Like, I want a certain sound to come from it and I want it to feedback on a certain note, it just does it instead of me really having to try and manipulate it out of the amp.

“Those amplifiers, I have a Tweed Bassman, a Pro Reverb, a couple of Bandmasters, a little Deluxe… We’ve got about 11 different amplifiers that he has built for me over the years and every one of them has got a different circuit in it. I usually set up four onstage and I’ll use a combination of two at the same time and blend the sound of those two at the front of house.”

When asked how important these modded amps are to his sound, Shepherd said, “For me it is paramount. You go from having an amplifier that you’ve been using for years that is off the shelf and you thought it sounded good and played great, and then you have a guy custom-build you one specifically around your style of playing, it’s like having a tailor-made suit. Everything about it just fits you perfectly.

“And I think that’s why in the early days you had that whole thing about when [Dumble] built people amplifiers he wouldn’t want people to sell them because that amplifier was built around that specific person’s style of playing. It was intended for that guy to play it.

"I go to his house and I sit for hours and hours and he just listens to me play. And he plugs me in to a variety of amps and he listens to what I am trying to get out of the amplifier; he closes his eyes and hears the way that I am playing it, and he anticipates what it is I am trying to get the amp to do, and then he goes and builds an amp around that.”

Shepherd's new signature Stratocaster is set to arrive later this month. To read more about the guitar, point your browser in this direction.