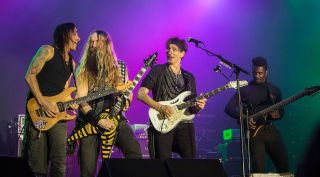 The show will be highlighted by Bettencourt, Vai, Wylde and Abasi's version of Queen's "Bohemian Rhapsody" - which will also feature Brian May himself lending a helping hand. Bettencourt also teamed up with Wilson, Hawkins and Warfield for a performance of Heart’s "Barracuda," with Julian Lennon for a cover of Radiohead’s "Karma Police" and with singer Gabriela for a song called "Use Me."

“Until us performers can get back home to our stage, on August 3, with a little imagination and lots of passion, our homes will become our stage," Bettencourt said in a statement.

“I hope we all have homeowners insurance, cause we’re blowing the roof off the place.”

At Home and Social with Nuno Bettencourt & Friends will air tonight, August 3, at 8 pm EST.

For more info on the special, stop by axs.tv.