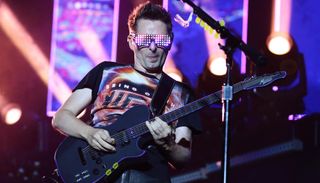 Speaking to Guitar World about the future of his Manson Guitars brand, Bellamy was asked about the last piece of gear that impressed him when he made the surprising announcement about the 1983 Tele.

“I’m not kidding! I had a whole team of people doing due diligence on it to make sure it was absolutely the right one, interviewing his family and all sorts. I managed to get it verified, and I’ve got his Telecaster that he recorded the whole Grace album with, and the song 'Hallelujah.'

“I haven’t bought it to hang it on the wall with a picture of Jeff saying, ‘Look what I’ve got.’ I’ve bought it to actually attempt to use it and integrate it, and keep this guitar part of music. I’d like to believe that’s what he would have wanted.”

Previously owned by Matt's Guitar Shop in Paris, the guitar made headlines back in December when it was leant to Myles Kennedy, who used the guitar to cover "Hallelujah" at an Alter Bridge concert in the city.

Matt's Guitar Shop proprietor Matt Lucas had purchased the guitar from a British collector in 2017, and contacted Bellamy first when he decided to sell the guitar on.

Known for its distinctly bright tone, the guitar was inspected extensively by Bellamy and his employees at Manson following its purchase.

“I’ve had all the electronics analyzed - nobody’s changed anything - but the pickups, they think the neck pickup was a mistake by the manufacturer because for some reason it’s slightly out-of-phase, and there’s also something weird about the wiring.

“To cut a long story short, it’s got an extremely glassy, bright sound, and it doesn’t really sound like any other guitar I’ve used before.”

As for Bellamy's future plans with the guitar, he said "I’ve already used it, actually. It’s on a cover song that we’re doing with the Jaded Hearts Club. But I’m hoping to use that a little bit here and there on the next Muse album as well."