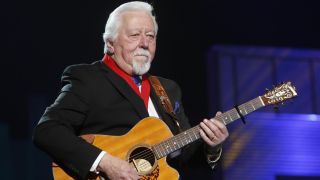 Jimmy Capps, an illustrious country guitarist and 50+-year veteran of the Grand Ole Opry's house band, has died at the age of 81, a rep for the Opry confirmed.

Most well-known for his incredible tenure at the Opry - which began in 1967 and lasted up to the week before his death - Capps was also a first-call session guitarist, lending his skills to a litany of timeless country hits, including Kenny Rogers’ “The Gambler,” George Jones’ “He Stopped Loving Her Today” and George Strait’s “Amarillo by Morning.”

Born in 1939 in Fayetteville, North Carolina, Capps first came to prominence in the late '50s with the Louvins, performing with the band at the Opry, and becoming an Opry member in 1959.

Capps would go on to become the lead guitarist in the Opry's house band in 1967, backing the radio show’s guest artists every week for more than 50 years.

Some of Capps' other session credits include Tammy Wynette’s “Stand by Your Man,” Barbara Mandrell’s “I Was Country When Country Wasn’t Cool" and the Oak Ridge Boys' “Elvira.” He was inducted into the Musicians Hall of Fame in 2014.

In a 2019 interview with the American Federation Of Musicians, Capps said he felt blessed about his lengthy career.

“It’s been that way all down through the career I’ve had. Every day is different, and that’s just it: You get up wanting to do what you love. And not everyone is blessed with being able to do a job that they love. But I have been.”