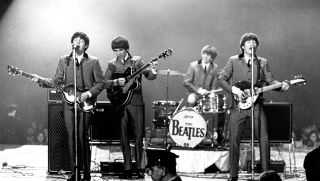 The Beatles wrote a virtual library of killer guitar riffs, and the one that powers "I Feel Fine" is undoubtedly one of their best, and most intricate. Even guitar legends with more than half a century of experience have admitted to struggling with it to this day.

Amazingly though, that riff isn't even the most groundbreaking part of this 1964 hit. That distinction belongs to the distinct buzz of feedback that perfectly presages John Lennon's electrifying opening salvo.

Paul McCartney tells the story in a 1994 interview:

“John had a semi-acoustic Gibson guitar. It had a pick-up on it so it could be amplified. We were just about to walk away to listen to a take when John leaned his guitar against the amp. I can still see him doing it - and it went, ‘Nnnnnnwahhhhh!' And we went, ‘What’s that? Voodoo!’ ‘No, it’s feedback.’ Wow, it’s a great sound!’ George Martin was there so we said, ‘Can we have that on the record?’

"That’s me completely,” Lennon said of "I Feel Fine" to Playboy in 1980. “Including the guitar lick with the first feedback anywhere. I defy anybody to find a record, unless it is some old blues record from 1922, that uses feedback that way. So I claim it for the Beatles. Before Hendrix, before The Who, before anybody. The first feedback on record.”

Though they surely couldn't have foreseen the infinite directions guitarists would take recorded feedback in over the next 50+ years, the Fab Four's decision to incorporate it into a pop song was unprecedented, and paid huge dividends.

"I Feel Fine" topped the US charts for three weeks, and the UK charts for five. And, as for pushing the boundaries of popular music, they were just getting started...