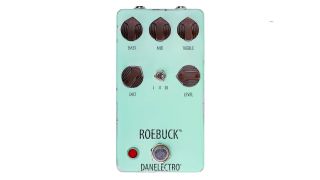 The Roebuck, based on the ultra-rare and highly-sought after '90s-era Ibanez Mostortion pedal, features a metal chassis and a relic'd finish of sorts, complete with dings on the case and scuffed paint.

Controls include a touch-sensitive three-band (Bass, Mid and Treble) EQ, a three-way clipping mode switch and a soft-action footswitch.

All this results in a pedal that Danelectro says is perfect for everything from classic, drive-heavy blues to sweet British lead tones to scooped metal.

The Danelectro Roebuck overdrive pedal is available now for $199.

For more info on the Roebuck pedal, head on over to danelectro.com.