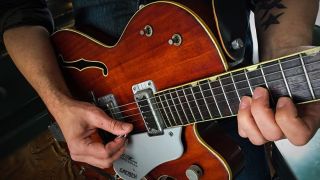 Feeling a bit out of shape on the guitar? Here’s a training program designed to whip your picking technique and improvisational skills into tip-top condition in just 20 weeks. Conceived by the late, great G.I.T. co-founder, Wrecking Crew studio stalwart, and guitar sensei Howard Roberts, “the chop builder” (as we then called it), was informally introduced into the G.I.T. curriculum around 1978 and later published first as Jazz Guitar Technique in 20 Weeks and eventually as Superchops!

Within its pages, Roberts formulated a way to permanently imprint super picking chops and stamina as an indelible motor skill, while simultaneously advancing your improvisational skills. It’s a rigorously disciplined, military-like program that must be followed to the tee in order to achieve its ultimate objectives.

The basic concept is quite simple: You play nothing but uninterrupted alternate-picked eighth notes, and, eventually, eighth-note triplets, over a backing chord progression of your choice, beginning at a slow metronome setting of 50 beats per minute. No ornamentations or variations in articulation, such as hammer-ons, pull-offs, slides or bends, are allowed until Week 18.

You adhere to a strict 60-minute practice session, six days a week, increasing the tempo by just 2 bpm per day. Over the course of 20 weeks you’ll experience a dramatic improvement in your playing. The bear is the determination required to faithfully stick to the program for 20 weeks! Keep in mind that this lesson is a synopsis of an 88-page book that contains invaluable advice, tips, musical examples and even psychological support from H.R. himself. I highly recommend getting an original copy.

A working vocabulary of major, minor, pentatonic and blues scales, as well as an understanding of major- and minor-scale harmony, will facilitate more options for creating melodic lines, and enhance your ability to improvise over chord progressions. You’ll need a well set-up guitar, some kind of recording device, a metronome, timer and a quiet place to practice, along with at least six different chord progressions in two different keys. (Tip: Use any length progression or an entire song form.)

If you’re ready to commit, here’s a synopsis of your daily 60-minute regimen for Week 1:

Clear your practice area of all distractions. (Turn off your phone!) Tune up. Warm up by playing notes slowly over the entire fingerboard to avoid unintentional “flams” between your picking and fretting hands. Be sure to adhere to the indicated time frames throughout the following steps.

Record 10 minutes of a chosen chord progression, using only whole notes and half notes as needed at a tempo of 50 bpm, or slower if necessary.

Play uninterrupted, alternate-picked, eighth notes over the entire 10-minute recording. Do not stop! (Tip: Remember, you can always begin the program at a slower tempo.)

Take a 3-minute break. Put the guitar down. Stand up and stretch (or sit if you’ve been standing). Mentally review the chord progression and consider melodic strategies.

Okay, easier said than done, right? If you’re having trouble generating that endless stream of eighth notes, try incorporating the following melodic strategies, all of which can be mixed and matched. Keep in mind that these examples are only intended to provide guidelines for your own melodic inventions. Analyze and memorize them if you like, but you’ll ultimately need to come up with your own ideas if you want the program to work as intended.

Ex. 1’s 12-bar improvisation is played over our sample progression - a 4/4 recasting of Toots Thielemans’ jazz-waltz standard, “Bluesette” - using only the third and seventh of each chord as melodic guide tones, illustrating how much musical mileage you can get out of voice-leading. Try targeting other chord tones - root-3, 3-5, root-7, 5-7, etc.

Arpeggios provide a great vehicle for learning how to create a melody over a chord progression. Each note in Ex. 2 is part of the corresponding chord of the moment. Bars 1-8 comprise arpeggios played in ascending or descending order, while bars 9-12 feature melodic permutations of their respective chord tones. (Tip: You can skip or repeat notes in any arpeggio.)

Key-center-based lines provide all of the “correct” notes for any chord progression by matching chord motion with a relative scale, but require a bit of theory to figure out. Here’s the deal: In any major key, the I and IV chords are major sevenths, the II, III, and VI chords are minor sevenths, the V chord is a dominant seventh, and the VII chord is a minor-seventh-flat-five. This allows you to pair any chord or progression with an appropriate major or minor scale. (Tip: Do some research on minor-scale harmony.)

Bars 2 and 10 feature some hip b9 alterations over the B7 and D7 chords (thanks to their relative harmonic minor keys), but major key-center playing generally produces “vanilla” lines that require some seasoning. You can get there via…

One way to create harmonic extensions and melodic tension-and-release over a chord progression - essential jazz improvisation tactics that also apply to other styles - is to play lines based on specialized scales that outline each chord. It’s a cumbersome process at best, but a more hip and economical way to get the same result is to utilize the many substitutions shown in Ex. 4, including IIIm7-for-Imaj7, VImaj7-for-IIm7, m7 or maj7 played a whole-step below or half-step above altered-dominant seventh chords, flat-five subs and more.

Here, Bm7 (enhanced with a chromatic passing tone) subs for Gmaj7 (III for I) in bar 1 to create a Gmaj9 tonality, and an A minor pentatonic fragment over F#m7b5 and Cm9 arpeggio rooted a half-step above the altered B7#5#9 cover the IIm7b5-V7 movement in bar 2. Bars 3 and 4 feature descending chromatic G, F#, F, and E arpeggios, to imply Em7-A13b9-Dm7-G13b9 against the more basic underlying progression, while diatonic Cmaj7 and Dm lines dominate bar 5, before the IVmaj7-for-IIm9 and play-a-major-seven-arprggio-one-half-step-above-an-altered-dominant-chord rules comes into play in bar 6.

More diatonicism mixed with chromaticism turns up over Bbmaj7 in bar 7, followed in bar 8 by an ascending Bbm9 (a.k.a. Dbmaj7) run and descending Eaug (E augmented) arpeggio played over Bbm7-Eb13. An unlikely C blues scale played a major third above Abmaj13 makes an appearance in bar 9, followed by two descending Eb and C motifs over Am7b5-D7#9 in bar 10. (Tip: Extend this motif up or down in three-fret, minor-third increments to create a cool diminished-scale sequence.)

Bars 11 and 12 revisit the subs from bars 3 and 4 with a twist: Here, the Bm and Am arpeggios alternate with Bb and Ab triads, the flat-five, or tritone, subs for E7 and D7, before cycling back to the top of the progression. Run with it, but remember that these examples are for reference only. It’s up to you to make the magic happen!

Get with the program

Week 2 follows the exact same routine as Week 1, using the same chord progression transposed to a different key, beginning at 62 bpm and ending at 72. (Remember, we’re increasing the tempo by 2 bpm per day.) Week 3 follows suit with a new chord progression and tempo range of 74-84 bpm. Week 4 features the new progression transposed to a different key and tempos ranging from 86-96 bpm. Similarly, Weeks 5 (98-108 bpm) and 6 (110-120 bpm) introduce a third progression and its transposition. Week 7 (122–132 bpm) is a review of the first six weeks. Play each previous weekly routine for just one day until you’ve reviewed all six programs.

Week 8 marks the transition to alternate-picked eighth-note triplets played at 86-96 bpm over a new, fourth chord progression, and Week 9 transposes the new progression to a different key with a maximum-tempo goal of 104 bpm. Continue the same regimen through Week 13 using two new chord progressions and their transpositions until you reach a tempo goal of 136 bpm. Week 14 is a review of Weeks 8-13, at the rate of one previous progression and key per day, with a top-tempo objective of 144 bpm.

Weeks 15-17 are meant to review all previous lessons in any order, to establish your present maximum tempo as a permanent reflex (from 152-168 bpm), while incorporating both eighth notes and eighth-note triplets at will. Follow all steps and time frames as before. Finally, during Weeks 18-20, we progress from 176 to 192 bpm and introduce (at last!) hammer-ons, pull-offs, slides and bends to the routine, using any previous progression. This should produce a noticeable increase in manual dexterity and playing speed.

Although this is primarily a jazz-oriented lesson, Roberts’ 20-week program is applicable to any musical style. So go ahead and lay down a 12-bar blues progression, a country tune, the changes to a Bach bourrée, or the outro vamp from “Stairway to Heaven” and solo to your heart’s content - it’s all good. Just stick to the rules, do the work and the results will blow your mind. Thanks, H.R.!