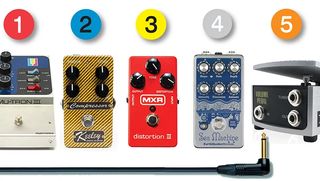 Here is a quick and easy guide to the conventional wisdom on pedal order. While there are good sonic reasons to follow these basic principles, many famous players have chosen to break the rules, and they’ve crafted some pretty compelling sounds. Feel free to experiment. If it sounds good to you – go for it!

As auto wahs, envelope followers and other dynamically controlled filter effects respond to your attack, you don’t want to limit dynamics with compressors and/or distortion pedals that reduce dynamic range. Most players also put wah pedals first in the signal chain – mostly to come before distortion effects – however Tom Morello is a notable exception.

Compressors can raise the noise level of everything that comes before them, so they should come as close to the beginning of the chain as possible.

Distortion and overdrive pedals prefer to see an unmodulated signal, and the harmonics generated by a distortion device bring richness to any chorus, phasing or flanging effects that follow.

These effects come last in the chain – usually delay, and then reverb – because placing them before distortion pedals can trigger a jump in the ambient effect level whenever extra gain is engaged.

The Pros on Pedal Order

How you order your effects pedals determines your sound. While conventional wisdom provides some basic guidelines, here is some personal advice from the pros.

Bob Bradshaw: (Custom Audio Electronics): “I put the distortion devices early in the chain, then the filter-y and wah-type things and modulation, and then delays. I like the idea of a harmonically rich distorted signal being filtered, rather than filtering a clean sound going into an echo.

“You can also think of it as what the signal path in a studio situation would be if you were to plug your guitar directly into the input of your amplifier, and process that sound through outboard effects. You’re not going to have your echo first before going into your distortion boxes – unless you’re looking for a specific sound – because you want the echoes to die out naturally, and not with your distorted sound.”

Pete Cornish (Pete Cornish Ltd.): “Compressors should be first in line from the guitar. Do not use a volume pedal first, as this will defeat any compression, and leave the system with maximum noise if the volume pedal is reduced to zero. I tend to connect any distortion devices and high-gain pedals first in line, and the lower-gain pedals later. I have found that the higher-gain devices control sustain, and the lower-gain devices control the tone if they are connected in this order. Modulation devices can come next.

Dave Friedman (Rack System, Ltd.): “Pedal order is a very subjective thing, and I’ve had people do it all backwards because that’s the way they like it. Generally speaking, compressors come before overdrives, modulation things are kind of in the middle and delays are at the end. The wah is kind of a personal preference. Sometimes it’s in front early in the chain, and sometimes it’s after overdrives.

“That said, I’ve had people do wahs after delays – and at the end of whole boards – because they like to use them to filter the delays and other effects. The bass player from Rage Against the Machine liked his wah last and his delay first!”