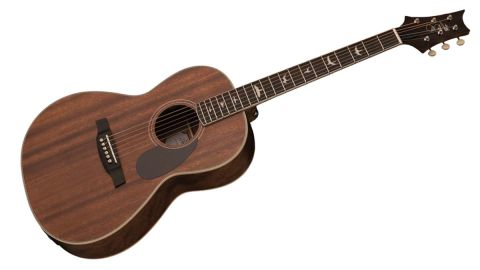 A compact acoustic that'd charm the birds out of the trees, the PRS Tonare Parlor SE P20E offers some exceptional tones and is a lot of fun for acoustic blues.

Parlors went out of style ages ago, but parlor guitars have remained in vogue for good reasons. Generally defined by having a small body with a narrow waist, coupled to a full-size neck (or close to it), parlor guitars can be a delight to play, yielding a compact, midrange-focused tone that projects well and sounds sweet and articulate.

They can be ideal for situations that don’t require the low-end muscle and volume of a jumbo or dreadnought.

PRS recently introduced its entrant to the parlor game with the Tonare Parlor SE P20 and P20E models, which are identical except for the Fishman GT1 electronics installed on the E version.

The P20E arrived with a Vintage Mahogany satin finish (also available in Black Top and Charcoal) and is representative of the line with its solid-mahogany top (beautifully grained in this case), cream herringbone binding and rosette, stylish ebony bridge with compensated bone saddle, bound ebony fretboard with PRS’s trademark bird inlays, and vintage-style tuners with ivory-colored “butterbean” buttons.

Overall, the construction gets high marks. Finishing is excellent, the frets are well attended (though not highly polished), the interior is tidy, and the inlays and bindings are cleanly installed.

The only minus is the nut’s sharp edges. The solid top employs what PRS calls its hybrid classical/X-bracing that combines a fan brace in the belly and a traditional X brace in the center.

It’s designed to provide a lot of sustain and depth for a guitar of this size. Indeed, the PE20E is lightweight and petite at just at 14 inches wide at the lower bout and 19 inches long, yet its acoustic response punches well above its size.

The tone is bold and sweet, with a mids-forward voice, as you might expect, but it’s also very open and dimensional, and so enjoyable to play.

Blues licks fall right off the fingers when picking thumping rhythms and slippery leads, and the guitar is dynamically responsive with that buoyant complexity in the midrange that’s so inviting for fingerstyle playing. It sounds cool with a slide, and what a great guitar for a singer-songwriter! It’s like having a complementary voice.

A fine-playing guitar by any measure, the P20E has a wide/fat neck shape that’s super comfortable, and the excellent factory setup, coupled with a Gibson-esque 24.72-inch scale length, gave a supple feel under the fingers with the medium-gauge phosphor-bronze strings, which didn’t produce fret buzz despite riding quite low to the neck.

The intonation is satisfying along the span of the neck, and the guitar’s abundant sustain draws you in and makes you keep on playing.

The P20E works well acoustically because it’s so resonant and presence-y, and the Fishman GT1 system (powered by a nine-volt battery in a compartment next to the output jack) did an admirable job of amplifying the guitar through a Fishman SA-200 amplifier and even a Fender Deluxe Reverb.

Clandestinely perched in the upper edge of the sound hole, the volume and tone controls are easily reached for quick adjustments, and kudos to the voicing of the tone circuit, which enabled me to easily balance the treble and bass to get a sound that retained much of the guitar’s natural acoustic flavor and vibe.

I’m sold on the Tonare Parlor SE P20E. This is a great-sounding guitar with a price/performance ratio that is off the hook. If you’ve ever considered bringing a parlor guitar into your life, the P20E is absolutely worth auditioning, and it earns an Editors’ Pick Award.