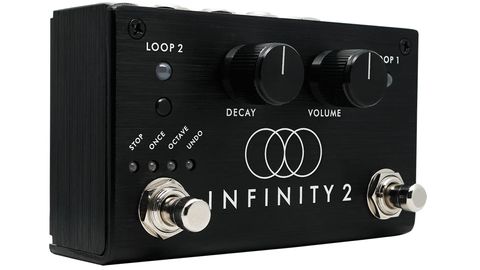 With its dual outputs, instant switching and intuitive layout, the Pigtronix Infinity 2 is an incredible tool for songwriters, placing new musical possibilities at the touch of a footswitch.

Loopers have become so popular that it’s no longer unusual to see them in live performance.

Traditionally, they’ve been employed to create ambient works in the styles of avant-garde guitarists like David Torn and Robert Fripp, but a generation of new artists have begun using them for traditional composition work, both at home and onstage for impressive on-the-fly songcraft.

It’s this latter group for whom the new Pigtronix Infinity 2 double looper was designed. It’s based on the original Infinity Looper, which became a favorite of many guitarists for its wealth of features and a switching system that made nailing rhythmic loops easier than most.

Infinity 2 crams a number of those features into a more compact, streamlined user interface that’s a stunning piece of industrial design. Like its predecessor, it’s a stereo looper with two independent loops that let players switch between verse and chorus parts, either during initial recording or while overdubbing. It also lets you delete the loop not currently playing and create a new part in its place.

Though you can certainly use it to create ambient loops in the styles of Torn and Fripp, Infinity 2 is geared toward song-oriented players. They’ll appreciate the verse/chorus-style workflow and being able to seamlessly switch between parts.

Almost all actions on the new pedal occur at the end of the current loop, allowing users to cue overdubs and switch loops without worrying about hitting the foot switch at exactly the right moment. Ambient loopers, on the other hand, might miss being able to cut into the middle of a loop, as well as the pedal’s lack of a reverse function.

A push button above the left foot switch changes the functionality of that switch to perform stop, stutter (one shot), undo and redo options, as well as octave effects. You can also trigger these features using an external switch TRS remote jack (not included).

When in Overdub mode, the undo functions let you instantly strip off all added layers and start again with the initial loop. The pedal has a volume knob that controls the level of both loops and a control for decay that causes looped audio to fade out progressively during overdubs.

When the control is fully clockwise, the layers pile up at full volume, while setting it fully counter-clockwise allows each overdub to last for only one loop cycle. When the decay knob is set anywhere in between, overdubbing creates constantly evolving loop textures that can be instantly snapped back to their prior state using the undo function.

The looper’s dual outputs can be configured for stereo (with dry and loop mixed together) or for discrete wet/dry operation, where the loop audio is summed to one output and dry audio is sent to the other.

Ambient loopers will appreciate the latter, as it will allow separate processing of the loop, but it’s solo performers of song-style material who will get the most from Infinity 2. With instant switching that makes hitting those turnarounds easy, a fabulous form factor and an affordable price tag, this pedal earns an Editors’ Pick Award.