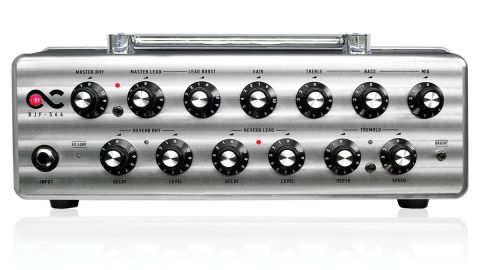 The One Control BJF-S66 has some phenomenal clean tones, with heaps of headroom, takes pedals well and is very well-designed; it's just the sort of amp to make you rethink solid-state amps.

Ever since I bought my Lab Series L7 amp back in 1983 (because I’d watched B.B. King and Ronnie Montrose play through them), I never understood why some players hated on solid-state amps.

I knew from first-hand experience (and second-hand - thanks Ronnie!) that solid-state amps could rock, and while I love tube amps, I also love anything that sounds good and can be used in a musical way. And that’s why I’m crazy for the One Control BJF-S66 on review here.

But whereas my Lab was a somewhat bulky and heavy 4x10 combo, this pint-sized powerhouse packs a ton of musicality in an amp you can literally lift with your little finger.

Designed by effects guru Björn Juhl, the BJF is so compact that it couldn’t even hold your lunch - more like a light snack. This 3.5-pound head can pump 100 watts into a four-ohm cab, 66 watts into an eight-ohm cab and 30 watts into a 16-ohm cab.

I initially went with an eight-ohm 1x12 Boogie cab with a Weber Gray Wolf, my lightest cabinet. I plugged in a Fender Tele, called up the Rhythm channel and totally got the blackface vibe that One Control is going for. The sound is warm and punchy, and it is indeed loud.

There is definitely good headroom here, too. This channel features a three-band EQ that is shared with the Lead channel. It’s a powerful and useful EQ, and I could dial it in to bring out everything that was cool about the Tele’s bridge and neck pickups.

Engaging the Bright switch necessitated altering those controls, but that was a great sound as well - more pop and less blues. My Tele was very clean in this channel, even with the gain knob cranked. I switched over to the Lead channel and, while it definitely has more muscle on tap, it was still pretty clean.

I swapped out the Tele for a humbucker-loaded PRS McCarty and instantly got more bite and dirt from both channels - as you would expect - but I was impressed with how sensitive the BJF’s input section was to differences in pickup output. So that got me thinking: If the input section was so responsive, how would it handle pedals in the front end?

In a word, awesomely, which might not even be a word. I lined up an Xotic EP Booster, a Maxon OD-9, an MXR EVH Overdrive, a reissue Dyna Comp and a Cry Baby, and the BJF performed great with every one of them.

The EP Booster just gave me more of everything in both channels. The Maxon did exactly what a TS-style pedal should do. The EVH turned the amp into a real fire-breather, and the Dyna Comp and Cry Baby worked their respective magic.

I could also combine any of these pedals in really hip ways, and the amp handled it all. And this was without even touching the onboard effects that this amp offers. So, I engaged the reverb, which has separate level and decay controls for each channel. It added a pleasing depth and space to all of my tones.

Then there’s the tremolo. A notoriously cool effect, this one is sweet, with a hypnotic pulse. With the included foot switch I could kick it in and out at will for a big-time added bonus. This is a really hip addition to the tiny-amp game.

One Control BJF-S66 66W...
Adorama
$599
We check over 130 million products every day for the best prices
View All Deals

I could pair it with my 15-pound Boogie 1x12, mount the foot switch to a modest pedalboard with a boost and a delay, and have a loud, flexible rig that weighs nothing and sets up in under five minutes.

The BJF-S66 doesn’t try to do everything, and what it does it does very well. It will undoubtedly make a lot of players think differently about solid-state amps.