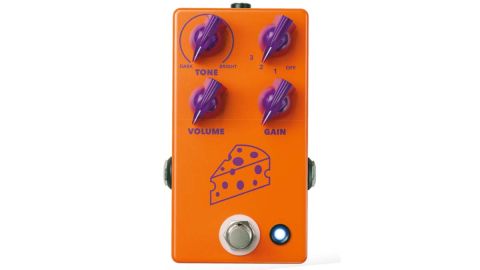 Imitation can be many things, from the sincerest form of flattery to a quick way to make a buck if none of your own ideas pass muster.

In the fast-moving world of stompboxes, where it’s become commonplace for builders to “clone” the pedals of others, an ongoing (and heated) debate rages about what circumstances justify reproducing another designer’s circuit.

In the case of JHS Pedals’ new Cheese Ball distortion and fuzz - which meticulously recreates Lovetone’s long-discontinued and quite rare Big Cheese pedal - the practice seems fully justified and even laudable. It’s both an homage and a way of providing affordable access to an artifact from an important chapter in stompbox evolution.

By comparison, Lovetone’s Big Cheese distortion/fuzz pedal, with just three knobs and one rotary switch, was a spartan offering for Lovetone, but it was embraced upon its release by guitarists like the Edge, Radiohead’s Colin Greenwood, My Bloody Valentine’s Kevin Shields and Wilco’s Jeff Tweedy, and soon found its way onto their pedalboards and many legendary recordings.

Scott, who remembers first hearing the legendary fuzz/distortion on a Radiohead album, meticulously copied every circuit detail of an original Big Cheese from his enormous personal pedal collection to create the new JHS Cheese Ball.

While the JHS pedal does use an orange-and-purple colorway similar to the original’s, it does not share its confounding control complement that prompted questions like, “Should I turn up the Curds or Whey knob for more gain?,” opting instead for the literal designations of volume, gain and tone.

The aforementioned rotary switch is also present and selects between four different modes. In its off position, the pedal’s tone control is completely bypassed; position 1 engages the tone control and imparts a scooped midrange tonality, position 2 keeps the tone control engaged while restoring midrange, and position 3 creates an extreme spitting, gated sound.

I used a Lollar P-90 equipped Jazzmaster-style guitar and 1968 Fender Princeton Reverb amplifier to put the Cheese Ball through its paces, and was immediately impressed by the usability of its sounds. The pedal does an admirable job of walking the thin line between distortion and fuzz and possesses a clarity and speed of response that allows it to sit above a mix instead of being subsumed by it.

Although the pedal’s gain control has a very short throw (it goes from “quite a lot” in the fully counterclockwise position to “woolly gobs” when dimed), the rotary mode switch drastically alters the unit’s character.

When off or in position 2, the Cheese Ball retains a somewhat civilized EQ contour that puts it in the same tonal zone as the best Pro Co Rats and the often-overlooked Tokai TDS-1. The mid-scooped position 1 setting yields a much more fuzz-like tonality, with an aggressive harshness that would be perfectly suited to stoner-rock and doom-metal applications.

And particularly when the pedal’s gain control is at maximum, position 3 unleashes a sputtering, gated retro squawk that will delight disciples of the White Stripes and their sonic forebears.

The Cheese Ball is a truly versatile effect with an aggressive, albeit very musical voice. It’s easy to see why the pedal it clones became so popular among guitar luminaries at the time of its release a quarter century ago. Kudos to JHS for resurrecting this extinct sonic delicacy!