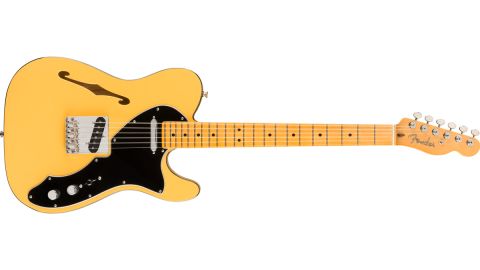 Britt Daniel's take on the Tele Thinline is a visually and sonically appealing electric that will suit a whole range of players.

While many guitar manufacturers reserve their signature models for shredders of the heavy metal and hard rock persuasions, Fender has perennially cultivated relationships with the many guitarists in the alternative and indie sectors who favor their instruments.

To date, the list has included the likes of Kurt Cobain, Thurston Moore and Lee Ranaldo of Sonic Youth, J Mascis of Dinosaur Jr., and former Smiths guitarist Johnny Marr. This impressive roster has now grown to include Britt Daniel, whose sharp and percussive rhythm attack has underpinned the music of the band Spoon for the better part of three decades.

For his signature model, Daniel created an amalgam of the two semihollow late-’60s Telecaster Thinlines that he uses as his primary touring guitars, incorporating elements of the vintage instruments’ factory specs and subsequent modifications that he has performed to them.

As a result, the Thinline, which features impeccable workmanship throughout, boasts a resonant and lightweight semihollow ash body with top binding and an f-hole in the upper bout that is beautifully complemented by the eye-catching Amarillo Gold nitrocellulose lacquer finish and large black Thinline pickguard. The maple neck, also nitro finished but with a smooth satin feel, features a Deep C neck profile and the forgiving combination of a 9 1/2–inch fretboard radius and 22 medium-jumbo frets.

The Daniel also acquiesces to modern conveniences where hardware is concerned. An Electrosocket output mount eliminates the looseness endemic to Telecaster jacks, a six-saddle bridge allows for individual string intonation, and Fender ClassicGear tuning machines provide a smooth and pinpoint-accurate 18:1 gear ratio, while they maintain a vintage look. A glance at the guitar’s back reveals the only telltale sign that this is a signature model: a raging bull engraved on the guitar’s neck plate, which Daniel says is meant to evoke the rootin’-tootin’ logos often found on choice pieces of vintage western clothing.

Electronically, the guitar features two handwound Custom Shop pickups — a vintage-style bridge pickup and a Texas Special neck unit — that were selected by Daniel himself from the slew of models available from the manufacturer. And while the control layout — one volume and one tone control, shared by both pickups, and a three-way selector switch — looks very much like that of a classic Thinline, a closer look reveals that the volume control has an embedded push-button S-1 switch that allows the neck and bridge pickups to be run in series as well as in the traditional, parallel configuration.

It’s tempting to bury the lead on this next section to build a suspense, but let’s just say it: the Britt Daniel Thinline is an absolute gas to play. The neutral neck contour is exceedingly comfortable and achieves exactly what it should, which is to say you will spend absolutely no time thinking about it when you go about the business of making music. The 9 1/2–inch radius allows for unfettered bending, while it leaves enough curb to the fretboard for chording duties to be equally comfortable.

Plugged into a ’60s Ampeg Jet front-ended by a Browne Amplification Protein dual overdrive and Wampler Faux Spring Reverb, the guitar simply delights. The bridge pickup has sufficient midrange to embrace overdrive while retaining just the right amount of bite and sizzle, and the Texas Special in the neck is open and bell-like, with none of the problematic muddiness that often plagues stock Telecasters in this position.

When both pickups are in use and the S-1 circuit is engaged, the guitar sounds gloriously huge and ringing, delivering a quintessential indie-rock rhythm sound that will have you thinking about modifying the other Telecasters in your collection for series pickup operation.

At $1,999 street, this is not exactly an inexpensive instrument, but it is by no means overpriced. When you factor in the Corona factory craftsmanship and nitrocellulose finish, the premium components and the inclusion of an Elite molded case that looks like it could survive a lifetime of touring (and maybe even a fall off a rather tall building), this is a square-value proposition for a guitar that’s ready to hit the road hard right out of the box. This one easily gets an Editors’ Pick award. Hats off to Fender and Britt Daniel on a job well done.