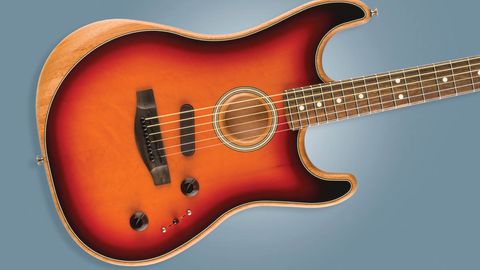 A bold reimagining of one of Fender's most successful designs, the Acoustasonic Stratocaster is a hybrid of bewildering potential, balancing electric playability with a range of superlative acoustic-electric tones.

Just when it feels like Fender has rolled out every imaginable Strat incarnation, the American Acoustasonic Stratocaster furthers the design and blurs the line between electric and acoustic instruments.

It’s built on a platform comparable to the Tele version introduced last year, featuring three distinctly different pickups, but it has a few new curves, including the obligatory double-cutaway and control layout of a Strat, plus fresh voicings generated by its digital Acoustic Engine.

The ultimate attraction is the broad blend of acoustic and electric tones on offer via the ever-fantastic Strat platform. The Acoustasonic is a little larger and slightly less contoured, yet still slim and sexy. Its lightweight, hollow mahogany body has a natural finish, while the top is available in a variety of hues.

I chose the three-color sunburst finish because it’s bold and looks fitting on an acoustic, but this is certainly a different-looking instrument, no matter what finish you choose.

Everything about the Acoustasonic Strat is a hybrid. The electric-style neck is bolted onto a slender body with a ported resonance chamber and an acoustic-style bridge, and strung with phosphor-bronze strings, including a wound third.

There’s no pickguard or whammy bar. The feel of its slightly finished neck and body is distinctly wooden, yet electric qualities come to the forefront in play. Strat cats will find the deep C-shaped neck profile wonderfully familiar, with fantastic playability.

The top and body are very resonant, and the tone emanating from the soundport has an interesting speaker-like compression akin to a resonator cone, where each note pops out with definition. It’s quite practical when there’s no amp available, such as backstage in the dressing room or riding along in the van. But the real action begins with amplification.

Fender teamed up with Fishman to create a unique pickup system featuring a Matrix undersaddle piezo transducer and a Z-Axis body sensor under the bridge, plus a Fender N4 Noiseless magnetic in the bridge position.

The Acoustasonic Strat has a five-way blade switch and a pair of wooden volume and mod knobs. Functionality is unique because the whole shootin’ match runs through a digital signal processor that’s preset with a variety of acoustic guitar models plus two Strat sounds.

For each position, the mod knob offers an A voice (fully counterclockwise) and a B voice (fully clockwise). Blend them together until the balance suits you. The system runs on a rechargeable lithium-ion battery, and the metal output jack houses a mini-USB charger slot and battery-status indicator.

For me, the only way to become familiar with the voices is to scrutinize the list in the startup guide and then select away while making mental notes of which ones I like best.

The first two positions host Core Acoustic and Alternative Acoustic voices, which sound pretty darn good, but the real fun for me started in position three, designated Percussion & Enhanced Harmonics, because that’s where the body sensor pickup comes into play.

The Sitka spruce/rosewood auditorium selection in position A is already a fine voice, and turning the mod knob toward position B yields a more open, ringing tonal quality. The body sensor adds fullness to the bottom end and captures any slapping and tapping on the top with a clear, high-mid percussive sound.

Position two, Acoustic & Electric Blend, is handy because you can flip from the Engelmann spruce/rosewood dreadnought sound of voice A to the pristine Fender electric clean tone in voice B with a twist of the mod knob, and the in-between combinations sound hip. Position one offers a nice fat electric tone, as well as a divinely dirty one.

That brings us to amplification. The Acoustasonic Strat sums the signals of its three pickups into one. It sounds cool through a tube amp, an acoustic amp or directly into a mixing board. Take it into the studio and the options at your fingertips are awesome. The same is true of the stage, but a true acoustic-electric aficionado has choices to make.

Run it into your acoustic rig for best results when using its acoustic voicings, or play it through your electric rig if that’s the thrust of your show. Libras like me that love a balance of both will need a box such as Fender’s ABY Footswitch ($40 street) in order to split the sound to electric and acoustic rigs.

That’s the bee’s knees, and I recommend every player give it a shot, even if you’re simply sending one signal direct to the house. By doing so, you can have all your groovy electric pedals in line to your tube amp, and acoustic effects, such as Fender’s own Smolder Acoustic overdrive pedal, happening on the acoustic side.

It would be truly terrific if future incarnations of the Acoustasonic would work with a TRS stereo cable, allowing the user to split the magnetic pickup signal off to the electric line while the acoustic transducers feed the acoustic line. In the meantime, an A/B box still works well enough.

Forget any preconceptions you have based on previous acoustic Strats. The Acoustasonic Stratocaster deserves to be judged on its own merits. I give it an Editors’ Pick award because it allowed me to combine acoustic styles, such as playing percussively in alternate tunings, with the sheer shredability of a bona fide Stratocaster.