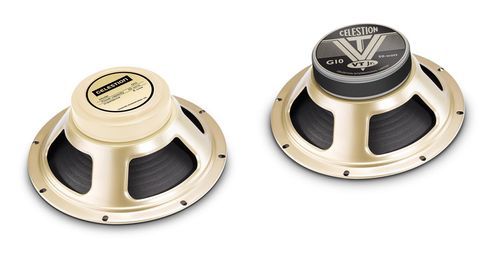 These are solid options from Celestion, with the budget-conscious well served by the VT Jr., while the Creamback offers boutigue-grade detail and serious upgrade potential.

Many popular 12-inch guitar speakers are based on classics made by Celestion in the ’60s and early ’70s.

Under the circumstances, it’s no surprise the hallowed British manufacturer has been less known through the years for 10-inch speakers, which just didn’t figure much in its vintage catalog.

However, the company has gone to great lengths to change that in recent years. Celestion’s G10 Greenback delivered that classic crunchy flavor in a smaller driver more than a decade ago. The G10 Gold has won many fans, and the G10 Vintage has long been considered a great-sounding sleeper by many guitarists.

Now, the new G10 Creamback and VT Jr. are here, offering two new flavors and price points for fans of that special something only 10s can deliver.

I tested each speaker in an extension cabinet made from solid pine and measuring 22 by 20 by 10.5 inches. It was fed by a tweed Deluxe-style amp and a Friedman Small Box head with the master reined in to keep the output safe for these particular speakers.

My guitars were a Nik Huber Orca 59 (a Les Paul–like dual-humbucker model) and a Fender Telecaster.

Three flavors of 12-inch Creamback speakers have become big hits for Celestion in recent years: the G12M and G12H with ceramic magnets, and the Alnico Cream. With that in mind, it makes sense that a 10-inch version would follow in their wake.

This speaker has a 96dB efficiency rating - pretty lively and respectable for a 10 - a 20-ounce ceramic magnet and a power-handling rating of 45 watts.

As with the bigger Creambacks, the G10 Creamback immediately displays its lineage from several decades of Greenback production with a muscular, slightly mids-forward performance that feels instantly British and overtly classic rock at that.

Hit with cleans from either amp, it’s a sweet, detailed and appealing speaker with little propensity toward treble spikes and a good overall balance. Lows are decently full for a single 10, promising fuller bass still from a pair in the right cab.

Pushed with some overdrive, the G10 Creamback segues nicely into that blend of smoothness and aggression that the better Celestions do so well. There’s just a little grittiness in the upper mids to enhance the texture, a notable characteristic of the G12M Greenback line.

Yet it displays more solidity in the lows than the existing G10 Greenback, and good balance throughout the range, with neither mud nor harshness in evidence anywhere. The immediacy that fans of good 10-inch speakers praise is there in abundance, along with enjoyable dynamics that make it a very playable speaker.

Previously available only as an OEM unit for amp manufacturers, the Chinese-made VT Jr. was mostly found in relatively affordable smaller combos. The speaker is an appealingly cost-effective option to the general market offering.

Something of a little brother to the 12-inch V-Type, the VT Jr. is intended as a versatile and well-balanced 10 that blends the best of Celestion’s vintage and modern characteristics.

It carries a 20-ounce ceramic magnet and displays an efficiency rating of 95 dB (about average for a 10). It has power-handling capabilities of 50 watts, which, as with the G10 Creamback, should make it more than robust for the smaller combos in which it’s likely to be used, and sturdy in 2x10 and 4x10 extension cabs.

Fed by either amp, and either guitar, the VT Jr. proved itself a very likable speaker and a good all-rounder for a wide variety of music. It has the focus and detail to pump out clean chicken-pickin' from the Telecaster, while still handling overdrive from either amp without too much blare or brashness anywhere in the frequency spectrum.

Overall, its balance is pretty good.  It’s a relatively neutral-sounding speaker, albeit within the realm of Celestion voicings, and displays enhanced articulation compared to many other 10-inch speakers in this price range.

Auditioned back to back with the G10 Creamback, the VT Jr. is perhaps a somewhat smaller-sounding speaker. It’s just a touch thinner-sounding, and less rich and deep than more expensive 10s.

But that’s more a reflection of the Creamback’s impressive body, texture and muscularity relative to the format than any overt failing on the part of the VT Jr. This is a good guitar speaker in its own right and should offer an affordable upgrade to many players seeking to replace more-generic 10s.

With these two new models in the oft-underserved 10-inch sector, Celestion is providing great new options in the budget and boutique ends of the market. As a result, it’s now much easier for guitar players to dial in their ideal tones. Well done!