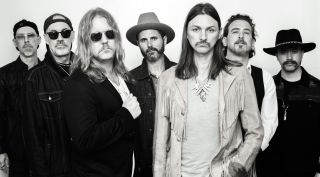 The Allman Betts Band have announced a new album, Bless Your Heart.

Set for an August 28 release via BMG, it's the second studio effort from the band led by Devon Allman and Duane Betts, the respective sons of Allman Brothers Band legends Gregg Allman and Dickey Betts.

Like its predecessor, 2019's Down to The River, Bless Your Heart was recorded at Muscle Shoals Sound Studio on two-inch tape, with additional tracking in Memphis and St. Louis.

Its first single, “Magnolia Road,” will be premiered tomorrow, June 19.

“I think we definitely challenged ourselves, pushed ourselves artistically, and widened the spectrum on all levels," Betts said of the album in a press release. "We wanted something that was a little more sweeping. A deeper experience.”

“I hope what people hear on Bless Your Heart is a band that’s having a love affair with being a band,” added Allman.

You can check out Bless Your Heart's tracklist below. To preorder it, step right this way.