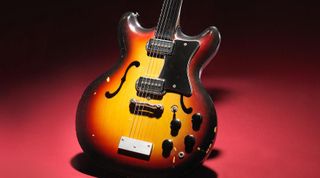 According to Bonhams – the auction company in charge of the listing – the guitar remained in Harrison's collection until 1984, when he gave it to session guitarist Ray Russell, with whom he worked on the music for the Handmade Films production, Water.

It is also believed that John Lennon played the guitar during a 1968 interview at Abbey Road for the Kenny Everett Show.

For more information, head to Bonhams.